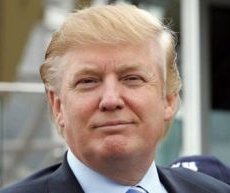 Trump arrived Saturday in Tbilisi, and Sunday held a press conference in Batumi, where he plans to cooperate with local investors on building a 47-storey residential high rise on the Black Sea coast.

He presented the plans at a press conference in Batumi, together with President Mikheil Saakashvili. After the press conference, the well-known American investor and TV personality left Georgia from Batumi airport.

Giorgi Ramishvili, head of Silk Road Group, said that Trump is entering Georgia, and that Silk Road is his local brand.

Silk Road Group has been criticized for lack of transparency, and there have been claims that it conspired with authorities to force its plans through.