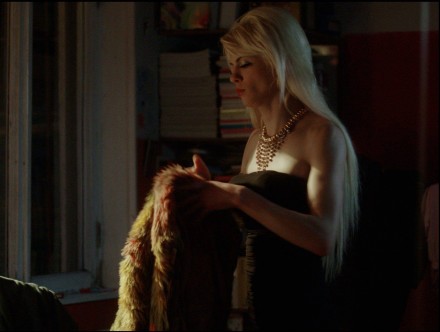 Bianka filmed in the Gospel of Anasyrma

Short film The Gospel of Anasyrma was screened yesterday in headquarters of NGO LGBT Sakartvelo in Tbilisi.

The film shot by director Elene Naveriani tells a story of Gabriel, a young Georgian man, who enters a romantic relationship with Amaia, a transgender woman living on the outskirts of Tbilisi.

Although in love, Gabriel strives to find a place for his relationship in a transphobic social setting.

The film makes little use of dialogue, while depicting different forms of transphobia-based violence in a subtle, nonexploitative way.

‘In the film, we can see how Levan’s friends assault and bully him, which puts psychological pressure on him in order to conform to his social group. The film shows a range of social issues connected to transgender people. For instance, Amaia has problems with accommodation — she lives on the outskirts of the city. It also shows the indifference of people when Amaia is attacked on the bus stop at the end of the film’, LGBT activist, Miranda Gordeziani told DF Watch.

‘Today’s event is dedicated to the death of a transgender woman which happened two weeks ago. She was found dead in her apartment and the police thinks that she was poisoned by gas leakage. Certain people voice doubts that she might have been murdered. Tonight we are trying to celebrate her life and to make it as public as possible within the LGBT community how transgender people live — on her example’, Levan Berianidze, executive director of LGBT Georgia told DF Watch.

The film is currently not available to watch online, but will be shown at international film festivals.