Traffic restrictions many places in Georgia due to heavy snowfall

Traffic restrictions many places in Georgia due to heavy snowfall 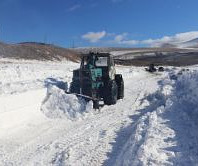 TBILISI, DFWatch–Georgia’s Road Department has established restrictions on road throughout the country due to heavy snowfall that started Saturday morning.

From 188km to 198km of Zugdidi-Jvari-Mestia-Lasdili road in Svaneti and 142km to 157km of the Kutaisi-Tskaltubo-Tsageri-Lentekhi-Lasdili road, traffic is only allowed for off-road vehicles. For other types of vehicles, traffic is restricted. From 70km to 188km of the Zugdidi-Jvari-Mestia-Lasdili road, trailers, semi-trailers and buses with more than 30 seats are prohibited from driving. Due to heavy snowfall, traffic from 60km to 106km of the Zhinvali-Barisakho-Shatili road is prohibited for all kinds of vehicles.

The amount of snow has also led to restrictions on 19km to 72km of the Pshaveli-Abano-Omalo road in the northeast of Georgia. From 106km to 117km of Goderdzi Pass, a section of the Batumi-Akhaltsikhe road, driving is prohibited for all kinds of vehicles.

From 80km to 136km of the Mtskheta-Stepantsminda-Larsi road, which leads to the border with Russia, trailers, semi-trailers and buses with more than 30 seats are allowed to drive only by using snow chains. It is prohibited for vehicles to stop along the 134km to 135km section in Dariali gorge on the same road.

Due to snowstorm and limited visibility, traffic along the 94km to 110km section of the Koda-Partskhisi-Manglisi-Tsalka-Ninotsminda road, which leads to the border with Armenia, driving is forbidden for all types of vehicles.