Tourists evacuated by helicopter from Tusheti

Tourists evacuated by helicopter from Tusheti 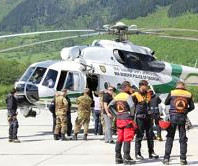 TBILISI, DFWatch–Many tourists were airlifted by helicopter on Sunday after being stuck in Tusheti in the northeast of Georgia due to bad weather.

Emergency crews evacuated more than 350 people by helicopter from the disaster zone, and brought them to Akhmeta and Telavi, two of the biggest towns in the Kakheti region.

Roads leading to Tusheti were damaged by landslides. Repair work began on Sunday.

There was heavy rainfall on August 21 in most parts of Kakheti. Due to the bad weather it was difficult to rescue the tourists earlier.

The Tusheti-Khevsureti hiking path is currently closed, while the road through Ardoti Valley, another option for travels between Tusheti and Khevsureti, has also been closed due to the disaster.

The Ministry of Internal Affairs called on tourists and locals to avoid these destinations until the weather improves.

Earlier rain flooded the river Arghuni in Khevsureti, as a result of which a bridge connecting with village Khonischala was destroyed and it became impossible to reach Mutso, which is a popular destination for tourists and hikers.