Tougher punishment for false reports of terrorism in Georgia

Tougher punishment for false reports of terrorism in Georgia 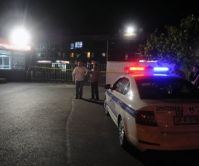 The building of television station Rustavi 2 was evacuated in September 2013.

TBILISI, DFWatch–The Interior Ministry in Georgia is bringing in tougher rules for falsely reporting a terrorist attack or a bomb.

The Administrative Violations Code of Georgia will now define stricter punishment for those who report false information to the emergency call center 112.

If someone older than 16 systematically reports false information to 112, he or she will be fined by 300 lari.

The Interior Ministry explains that if a person reports false information from a subjective evaluation, but assesses the situation incorrectly, he or she won’t be punished.

In September, 2013, there were many false reports about a bomb in parliament, at schools and at television buildings, and the buildings were evacuated many times. https://dfwatch.net/more-hoax-bomb-calls-in-tbilisi-tv-buildings-evacuated-87413 Under the laws in force at the time, authorities could not react to the wave of crank calls, as most of callers were minors.