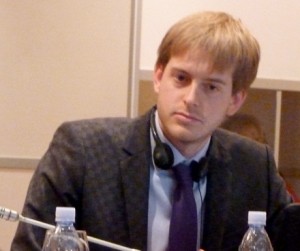 TBILISI, DFWatch – Journalists in Georgia have been intimidated without the legal system properly reacting, according to a new report by Transparency International Georgia.

“The law enforcement agencies are investigating these cases but they rarely end up with situations when someone is held responsible for threatening or persecuting journalists. All of this creates an atmosphere of impunity in society, where attacks on the media are let to pass,” says Mathias Huter, representative of Transparency Interntational Georgia.

The report remarks that journalists working in independent regional media outlets have difficulties in meeting with government officials and in getting information about regional development. In contrast to the national broadcasters, regional media have no possibility in covering visits of high officials to the regions. There have been cases when citizens who expressed ideas not acceptable to the ruling party were intimidated.

“Events like these created additional difficulties during pre parliamentary elections for regional journalists and will hinder their reporting on political issues,” Huter says.

Adding to this, privately owned publications are undermined by competition from publications funded by municipalities and autonomous republics as the share for media activities and subsidies in their budgets increased from GEL 7.47 million in 2011 to GEL 8.56 million in 2012. A number of municipalities even operate their own publications, intervening in the competition among local media. Aside from describing and investigating the current situation, the report also draws up recommendations for the Georgian government and regional media.

The recommendation for the government firstly focuses on its responsibility to enhance equal access for media outlets to higher officials and to inform them about how to get accreditation. Furthermore according to Transparency International, “Law enforcement agencies, prosecutor’s office and other relevant government agencies should make sure that all instances of intimidation and harassment are properly investigated and the people responsible punished according to the ombudsman’s recommendations.”

TI Georgia advises that in terms of media, journalists themselves should first try to somehow avoid unnecessary hostile confrontations with local authorities and contribute to establishing a constructive professional cooperation with them. Secondly, journalists should be recognized under the code of broadcasters and the charter of ethics and should act according to general journalistic principles, the organization writes.