Top Georgian football team disqualified because it is broke

Top Georgian football team disqualified because it is broke 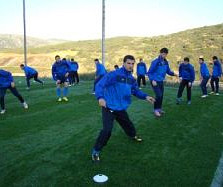 Zestaponi players on a practice trip to Spain in 2012. (Interpressnews.)

TBILISI, DFWatch–The Georgian Football Federation (GFF) has banned one of the country’s top teams from taking party in national championships after it stayed away from a match due to financial problems.

GFF decided this after Zestaponi FC violated the rules by not showing up for a match against Goris Dila on April 19.

Zestaponi is one of the top clubs in Georgian football (soccer). But Tuesday, GFF’s disciplinary committee decided to disqualify it, in accordance with the federation’s rules.

The committee also imposed a one year trial period for the club’s director. If he violates any rules within the next year he, he will be prohibited from taking part in any football related activities.

The club has one week to appeal the decision.

Zestaponi was founded in the summer of 2004 in the town with the same name, which lies is in the western part of the country.

The football club was owned by the shareholders of the ferro-alloy plant in the town. The club soon achieved success with the financial backing that gave, and playing for Zestaponi has been considered prestigious.

After the change of government, the plant refused to continue financing the club.

Talks were launched in February about the worsened financial situation. The Zestaponi gamgeoba promised to solve the problems, but didn’t fulfill the promise.

The club has been unable to pay its electricity and other utility bills for a month and the players haven’t been paid for several months. Two weeks ago, they received another promise about assistance from the gamgeoba, but nothing happened.

The president of the club, Ilia Kokaia, said that another problem recently popped up as football players are being bribed.

Kokaia didn’t mention names, but said that the club will soon file a complaint with law enforcement bodies. He thinks the difficult situation in the club is a reflection of a more general situation in Georgian football. Zestaponi’s president now offers up his club for sale for the symbolic sum of one lari (USD 0.45).

Fans of the club held a protest outside the gamgeoba office in Zestaponi demanding to save the club. No-one responded.