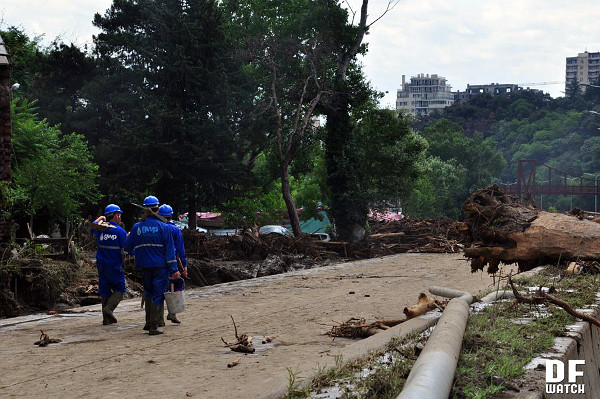 TBILISI, DFWatch–The search is still on for three people who are missing after a devastating flood in Tbilisi early morning on June 14 which killed at least 19 people.

Minister of Internal Affairs Vakhtang Gomelauri said on Tuesday that a large part of the gravel and sand from the flood has been removed from the disaster areas, but heavy machinery is continuing the clean-up work. There are rescue workers in full swing all over the affected areas.

“We have lost hope of finding them alive. We hope to find at least the dead bodies,” he said.

Rescue workers are standing by next to every machine in case remains are spotted.

There is no new information about predators that escaped a zoo in the flood. A tiger and a hyena from are still missing.

Thousands of volunteers were helping clean flooded areas for over a week, mostly in the zoo and Mziuri Park.

A few days ago, trained employees of government bodies replaced the volunteers, aided by machinery. Youth are now mostly involved with helping families affected by the flood.

On Tuesday, Health Minister Davit Sergeenko said about 2,000 people have been vaccinated against tetanus as a preventive measure.

Even though the risk of disease outbreak was low, he said, to reduce the risk to zero the government decided to relocate volunteers to safer locations and call on those who have even very small cuts or injuries to get vaccinated.