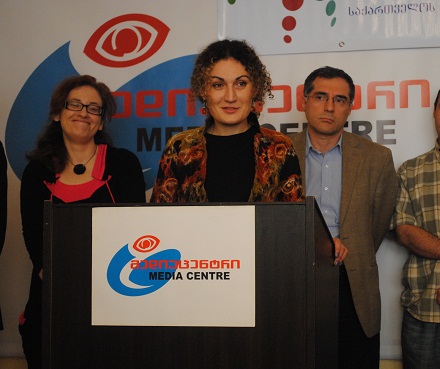 Ketevan Tsikhelashvili (center) has been leader of the platform until now, but left to become deputy minister for reintegration issues. Manana Kochladze (left) was elected new leader. To the right, Lasha Tughushi, editor in chief of newspaper Rezonansi. (Photo: Londa Beria.)

TBILISI, DFWatch — The largest Georgian union of civil society organizations December 24 met to discuss the role of civil society, and their activities and future plans.

The National Platform, as the union is called, has been joined by 106 civil society organizations. It is supported by the European Union to contribute to the priorities within the Eastern partnership cooperation.

The union expressed readiness to take part in democratic reforms and efforts to accelerate Euro-integration processes through a structured dialogue, thematic recommendations, sharing of expertise and civic monitoring before the 1 October, 2012 parliamentary election.

Three months later, the National Platform organized a forum, at which it was mentioned that the new Ivanishvili government has the will to cooperate more actively with civil society. To achieve this goal the government will hold regular meetings with representatives of non-governmental organizations.

Aleksi Petriashvili, State Minister for European and Euro-Atlantic Integration, and Victor Dolidze, head of the Permanent Mission of Georgia to the OSCE, attended the meeting, representing the executive and legislative branches of government, respectively.

The former head of the National Platform, Ketevan Tsikhelashvili, also attended the meeting. She now represents the government, as she was appointed as deputy minister of reintegration issues.

“Within the frames of the platform, there is a conflict resolution group. We expressed the will to cooperate with this group. We will have this kind of cooperation with civil sector very soon,” Tsikhelashvili said.

Since Tsikhelashvili left her post as head of the National Platform, representatives of the member organizations attending the forum voted for candidates to take over for her. Manana Kochladze, chairwoman of Green Alternative, will assume the duties as new head of the platform.

Manana Kochladze presented a new project which the platform will implement in the future, mostly focused on the small groups and on their work.

Tamar Chugoshvili, head of Georgian Young Lawyers Association (GYLA), said that the coordinating council will cooperate with those organizations that develop projects and manage to make the content not overlap that of other organizations.

Chugoshvili summarized what GYLA has done the last year.

“GYLA had to criticize or give some recommendations to the government about the election process, because there was no possibility for cooperating with the previous government and we were distance observers,” Chugoshvili said.

She mentioned that GYLA has focused most on the two issues media and the courts.

“We were very actively involved in the processes of must-carry and protested against the pressure on journalists and the seizure satellite dishes,” she said.