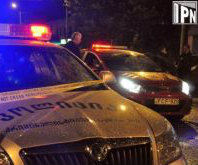 The minibus was flung tens of meters away when it was hit by the train. (Interpressnews.)

TBILISI, DFWatch–Three died and dozens were injured as result of a minibus crashing with a train in western Georgia on January 2.

The injured remain in hospital, several of them in a serious condition. Among the injured there were four minors.

The accident took place in the Imereti region, close to Marani. As it hit the train flung the minivan several tens of meters. The injured were taken to hospitals in Kutaisi, Abasha and Samtredia.

A 14-year-old boy is in the most serious condition. He was taken to Iashvili hospital in Tbilisi and is in resuscitation. He has collarbone and ankle fractures.

One of the injured passengers, Nino Samushia, told journalists that at the place where the accident happened there is no road block and no rail workers are controlling the traffic.

The doomed minibus was rented and was carrying relatives, nineteen people in all, who were returning from Marani to Zugdidi. No train passengers were injured. The train was on its way to Tbilisi.