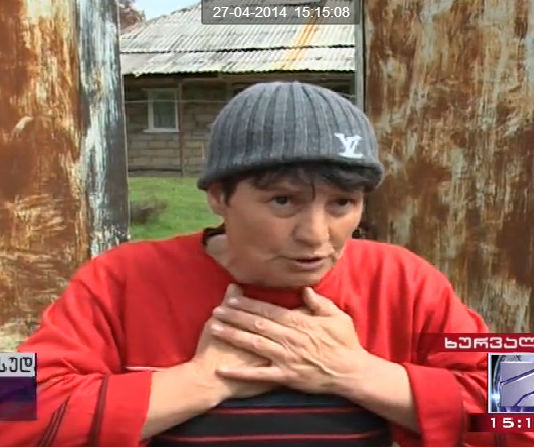 Rusudan Khuroshvili, one of the three women who were detained by Russian soldiers for allegedly crossing the disputed border. (Rustavi 2.)

TBILISI, DFWatch–Three women who were detained by Russian soldiers on the South Ossetian border on Friday have been released.

The three were detained in the village Khurvaleti, which lies right on the disputed border.

Georgian news agency Interpressnews reports that they were released Sunday after a court in Tskhinvali issued them a 2000 Russian rubles (USD 55) fine each.

Rusudan Khuroshvli (pictured), one of the detainees, told journalists after returning home that Ossetians paid their fines.

“They are not our relatives, I don’t know them. They said they know us from childhood and helped us. I don’t know anything else,” she said.

Along with the others, Lali Khuroshvili and Zeinab Kharkheli, she was taken to a Russian military base after being detained, and later placed in detention in Tskhinvali, the administrative center of the breakaway region.

Yesterday evening, one more Georgian was detained by Russians, Merab Kapanadze, 70, who remains in detention.

His case is likely to be brought up tomorrow at the Incident Prevention and Response Mechanism (IPRM), regular field meetings between the warring parties from 2008, usually held at Ergneti and hosted by the EU’s observer corps in Georgia, EUMM.

Hundreds of people a year are detained for crossing the de facto border. Georgia is using IPRM meetings to try to get detainees released. Also other security issues are discussed.