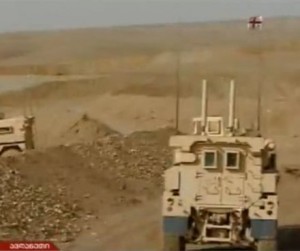 The three died as the vehicle they were driving in exploded. President Saakashvili visited the camp in Helmand province just two days ago.

TBILISI, DFWatch – Three Georgian soldiers have died in Afghanistan, according to Georgia’s Defense Minister. The country has now lost a total of fifteen soldiers in the ISAF (International Security Assistance Force) mission.

“The military servicemen died while they were carrying out combat task. Their combat vehicle exploded following an insurgent attack,” the ministry writes in a statement posted on its webpage.

Corporals Valiko Beraia, Ruslan Meladze and Paata Kacharava were killed in the attack. The three were serving in the volatile Helmand province as part of the 31th light infantry battalion of Georgia’s third infantry brigade, within NATO’s ISAF mission.

President Mikheil Saakashvili came on a surprise visit to camp Sukhvani just two days ago. In a speech he said the soldiers are making a big contribution to the wellbeing of Georgia. Later he appeared on TV eating dinner in a tent with the soldiers.

“This is for me the hardest blow to taking into consideration that only two days ago I was with them,” reads a statement released by the president’s administration.

Saakashvili expressed his condolences to the families of the dead soldiers. “I am proud that our country and our nation had such a devoted boys, still has and always will. ”

Georgia is one of the largest contributors to ISAF. Currently there are up to 950 soldiers, but 749 more will be added in spring, which will bring the whole contingent up to total of 1 700.