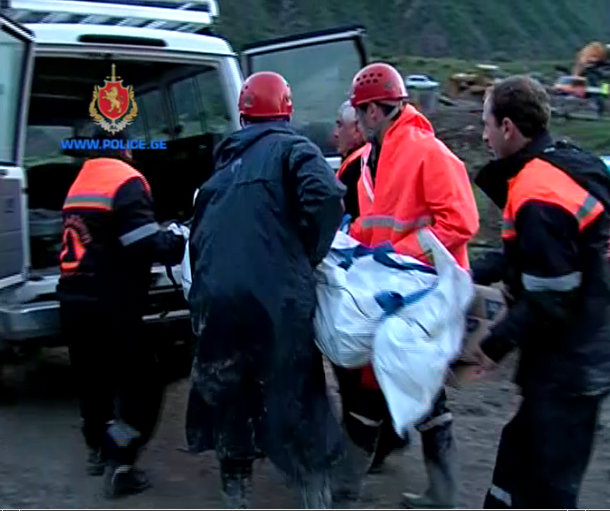 The third victim of the Dariali landslide was also found inside a hydro power tunnel. (police.ge)

TBILISI, DFWatch–A dead body was found Friday night during the ongoing search and rescue operation following the landslide in Dariali Valley on May 17.

This third casualty of the disaster was also found inside a tunnel that is part of a hydro power development in the valley.

A body which was discovered in the tunnel earlier on Friday belongs to a Russian citizen, according to the Interior Ministry. The body was brought to Tbilisi and will be sent to Russia in a few days.

Later in the evening, rescue crews found a third dead body there, which they think also belongs to a Russian citizen, but the body has not yet been identified. It was found together with part of a truck.

Four more are missing but hope is dwindling that any of them will be found alive.

Nino Giorgobiani, spokesperson for the Ministry of Internal Affairs, told DF Watch that from the very start of the rescue operation, the number of potential victims has always been seven, but some confusion arose out of the fact that this number seven includes the Ukrainian who was found the day after the accident and later died, but Georgian media continued reporting seven missing.

A truck and a tractor was found in the hydro power tunnel and during clearance work five more trucks were detected.