The UK’s position on current developments in Georgia

The UK’s position on current developments in Georgia 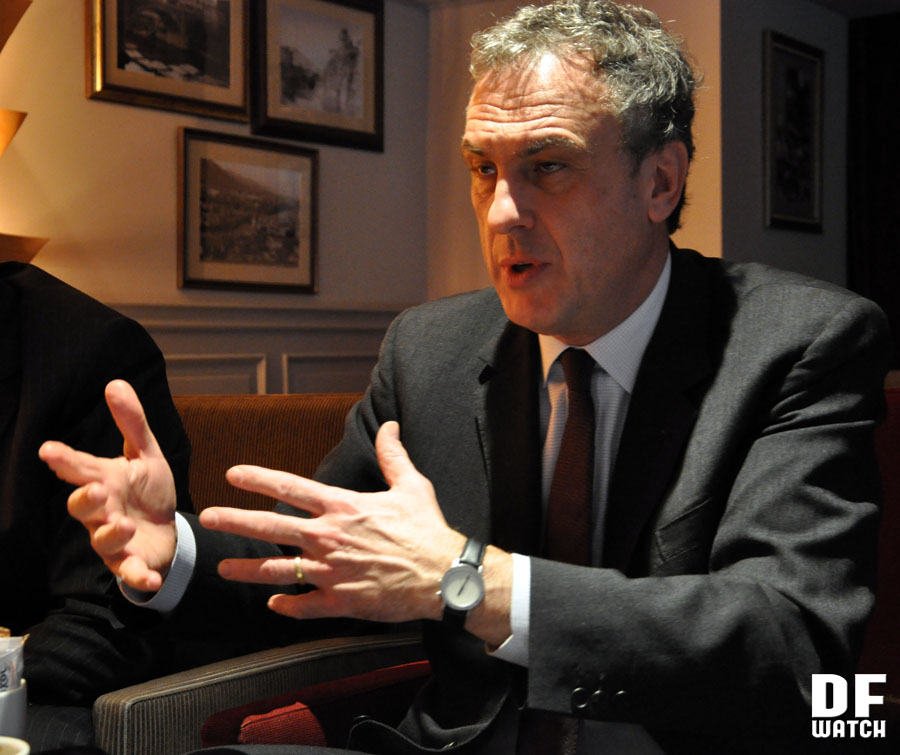 Simon Fraser, the UK’s Permanent Under Secretary and Head of the Diplomatic Service, is visiting Georgia. (DF Watch photo.)

DF Watch spoke to Simon Fraser, the United Kingdom’s Permanent Under Secretary and Head of the Diplomatic Service, and David Moran, the UK’s Ambassador to Georgia, about the current situation.

DF Watch: What is the view of the UK of our domestic processes as we for the first time are in the situation when government was changed through election and this was very important and on the other hand, there are difficulties what we now call difficulties of cohabitation?

Simon Fraser: It is obviously a very good time to visit Georgia and I am very pleased to be here, and it enables me to learn about the situation here, and you’re right, it is obviously an important moment and we welcome the fact that the election has taken place in the way it has, as you say a democratic transition. Clearly it’s an important moment and it is very important for us, as well as for, I believe, the people of Georgia, that the cohabitation is made to work effectively. The new government is making a number of moves and a number of policy developments. I think it is important and in the interest of the country and the people of Georgia that the political leadership are able to focus on the economic and social policy priorities for the country. We are quite encouraged by some of the recent developments, which I’ve been discussing with the ambassador and for example the passing of the resolution on the foreign policy orientation of Georgia was an example of forward movement. Clearly there are political disagreements, I just think it is important that those are pursued in accordance with due process so that there is transparency and clarity in the political process.

DFW: One of the most important ongoing processes is reviews of the constitutional amendments, which foresee reducing the rights of the president. How do you think those changes can contribute to the stability in the country and how important is it to agree on those issues? Do you think it is right to have so much power, how democratic is it to have so much powers focused in one man’s hands?

SF: My understanding is that in any case these constitutional changes are going to come into effect. It’s a question of the timing. I think it is for the people and the leaders of Georgia to make the decision on your constitution. I think it is important for us, what I would like to be clear about, is that there is a proper debate and proper process for making these changes in a way that come up with the maximum amount of agreement and consensual support.

Ambassador David Moran: I don’t think there is that much to add really. I think it’s a good idea that Georgia consults the Venice Commission to get opinions on changes that it wishes to make, given the Venice Commission’s great experience in this area. Ultimately, the text of Georgia’s constitution is like everything else here for Georgians to decide. We are hoping for results, which preserve plurality both in terms of institutions and in terms of Georgia’s democratic structures, and we look forward to seeing how the Georgian political process on the cohabitation reaches agreement and hopefully consensus, a wide consensus on any changes, not just one that we are discussing at the moment.

DFW: There are ongoing criminal processes of former government officials in Georgia. What is your opinion or concerns regarding those processes in the country? Do you think it has a negative effect on Georgia’s image?

DM: I don’t want to comment in detail. If people have committed offenses then I think it’s correct that they should be held to account for those, but I think it is very important that this is done in a transparent way in accordance with the judicial process and Georgia’s image will be damaged if that is not done. I think that’s the important point, the way in which you hold people to account for those actions is a very important issue. 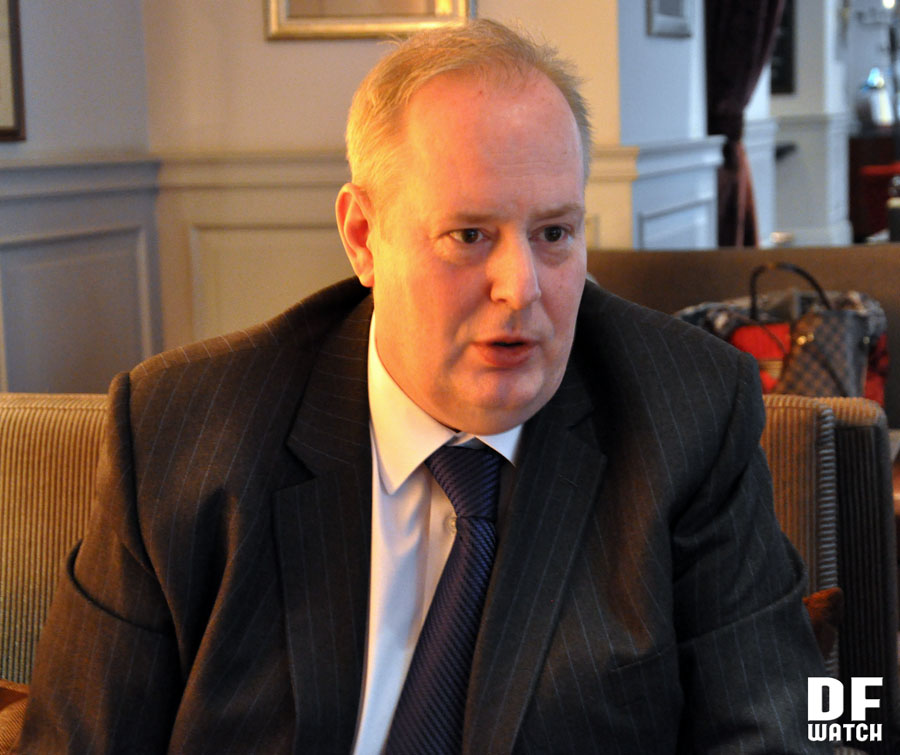 SF: It is desirable for the political leadership in the country to be looking to the future and not only focusing on the issues of the past. There may be issues to be resolved, but I think there are many challenges for the future, which need to be addressed.

DFW: There are many discussions in the country, but also outside of Georgia, including MPs, parties, international organizations. It is very unusual situation, because earlier we heard less such sharp rates. This causes responsive reactions, for example the latest important fact was a letter of MPs of Europe People’s Party to Prime Minister and a respond from Speaker of Parliament to them. EPP MPs observed really sharp position towards current government. Prime Minister has also responded to them. What is your opinion about this process?

SF: I’m aware that they’ve been one or two voices raised, but I think in open democratic debate voices are always raised and different opinions are expressed. I’m here representing the British government and certainly from the perspective of the British government we are not critical of Georgia indeed we welcome the political process that is going on here, we welcome the engagement of Georgia with the European Union and Georgia’s aspiration to negotiate an association agreement, a free trade area, we support that policy. We also welcome the action that’s been taken in order to perhaps reopen a bit of a relationship with Russia, the contacts that have been made there, and the work of Mr Abashidze in this area. We think that those are sensible moves of Georgia, so I would not focus on the criticism, I would focus on supporting the positive and I am here to understand what we the United Kingdom can do to help.

DM: One has to look at the range of views expressed about Georgia from abroad. Of course the criticism tend to be more dramatic perhaps than some of the other ranges of opinions, which are expressed, but it worth looking, it’s worth considering all of it. We and other European governments tend to look at what’s going on in Georgia at the moment as an opportunity. It’s complicated. Cohabitation is always a challenge, whether it’s in Georgia or in other places, but it’s an opportunity. Georgia has done some things, in which they are first in this whole post-soviet space in terms of political transition. Plus as Simon Fraser has said there are examples where the government and the opposition have collaborated. My own feeling is that actually there’s more in common in terms of Georgian politics than one might think, including in foreign policy. We the British government and some of our partners, we will continue to express concerns or ask questions, when we have them, but we are also keen to encourage a peaceful positive transition and that’s what we’re here to help support.

SF: There is indeed a meeting taking place which is actually the foreign ministers and the defense ministers – two plus two. This is part of the structure of our bilateral relationship with Russia. It is very important because we are trying to build our relationships with Russia politically and economically as a major partner. I haven’t seen the agenda of their talks, but I’m sure that the issues relating to security and stability will be on the agenda, but mainly focused on the bilateral relationship. Of course it is important for us in our relationship with Russia that we have the ability to have the dialogue, which allows us to look strategically at the range of issues and that helps to ensure that in the region there is understanding about the issues at stake and the interests of different countries.

In the broader context we continue to support the Geneva process in relation to the conflict issues in the Caucasus. We continue to encourage Russia to abide by the terms of the Sarkozy-Medvedev agreement, and we ourselves through the EU Monitoring Mission and indeed our bilateral programs, continue to try to play a part in promoting stability and conflict resolution.

DFW: We’ve got question about Georgia’s western perspectives. What formula will you support if the issue of Georgia will come up on Vilnius Summit: Georgia’s aspiration or Georgia’s Perspective? Georgia tries to get more clear answers on Georgia’s perspectives in regards of EU integration. What will be your position?

SF: Clearly the Vilnius Summit is an important moment, and it is our strong wish and hope that we will be able to make significant progress with Georgia and indeed with other countries in moving towards the association agreement and the free trade area, so it will come up.

DFW: And what about visa liberalization?

SF: I didn’t mention the visa liberalization, because that is not part of the negotiations, but I just want to underline that it is very much British policy to support this. We have been champions of the European Union to strengthen its relationship with neighboring countries and though the neighborhood policy and we really believe that this is strategically and economically important. So it is true there is a discussion taking place still about the precise text in some areas, but our position is quite clear that we support the aspiration of Georgia to build a stronger, closer relationship with the European Union through this agreement.

DFW: And what about Georgia’s perspectives with NATO as ministerial and later Chicago Summit is coming up. What expectations we may have in this direction?

SF: We stand by the position that was taken previously on Georgia’s NATO membership, we support the aspiration of Georgia. I do think it is important for us to respect Georgia’s decisions in terms of how it builds its important strategic relationships with EU and NATO, bearing in mind also it’s also very important, the relationship with Russia. We need to respect that, but the aspiration of Georgia for NATO membership is something that we have supported and we will continue to support.

DM: Georgia has made progress in both areas of moving towards EU and NATO and of course as part of this process certain reforms are required and progress is being made on those, and further steps are still needed, but the direction of travel is positive and we, as Simon Fraser has said, we support Georgians and Georgia’s aspirations and actually work a lot beside Georgia on both areas, supporting both the EU and the defense relations side. For example the Defense Minister, Mr Alasania, was in London for high level talks just a few weeks ago with both the foreign and the defense ministers.

SF: I think it is also a good moment to pay tribute to the tremendous contribution that Georgia has made in Afghanistan, which we are very grateful for and we respect very much.

I just want to emphasize that we are interested in supporting you in political process to build the political relationship, but also we are very interested in developing economic and trade and investment links. So for example some British companies, like BP, are present in the market, but we would like to encourage more. The embassy two years ago opened a new economic diplomacy section in order to support that work. So for example in financial services, construction, consultancy, agriculture, I hope we will find new opportunities.