The rebranding of the Georgian opposition

The rebranding of the Georgian opposition 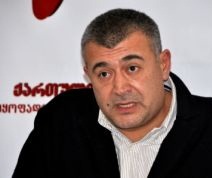 Levan Gachechiladze was the candidate of the united opposition in the snap presidential election on January 5, 2008.

TBILISI, DFWatch – What is the Georgian opposition? We give you the facts about what groups Bidzina Ivanishvili has recruited to his Georgian Dream coalition.

The Georgian Dream coalition currently consists of the Republicans, the Free Democrats, the National Forum, the Conservative party, the Industialist party and several other parties.

Some opposition parties, like the Labour party, have remained independent, and some are currently in dialogue with the government. Among them are the New Rightists Party and the Christian Democrats Movement.

Except from the Labour party, all of these parties were allied with different blocs at different times, despite ideological differences.

Some of what was formerly the opposition is today in government, but other parts of it turned to protesting after the rose revolution in 2003, and coalesced in the fall in 2007, when the first large protest wave hit the country, and finally, after the upshoot president Saakashvili used violence to disperse the rebels, snap presidential elections were announced in January 2008.

During the presidential election in January 2008, the opposition had a common candidate, Levan Gachechiladze. The only party not party of this coalition was the Labor Party. It participated separately, with a separate candidate.

The New Rightists Party also had a separate candidate. They joined the unified opposition for the parliament elections in 2008. The Republicans separated from the opposition union and participated separately.

Despite being alone, the Labor Party managed to overcome the election barrier.

Two directions were among right ideology parties. United opposition was named as radical opposition as they were holding street rallies and acutely criticized the government.

Among rigthist oriented parties in 2008 was the Christian Democratic Movement, under the leadership of Giorgi Targamadze, a former journalist. He was considered a like-minded person of Badri Patarkatsishvili, who was a financier of the movement that brougth Saakashvili to power. Despite this, the opposition had almost the same makeup in the parliamentiary elections,

Targamadze didn’t join them, but ran separately. His party also managed to pass the minimum barrier for getting representatives. Since then, they are considered a constructive opposition, which is always in dialogue with the government.

The Republicans were also participating independently in the last parliamentiary elections, but they were not able to reach the lower threshold for getting mandates.

After the elections, the united opposition collapsed. Later, it reconvened for the local elections in 2010. There were the Conservative Party, the Movement for a Fair Georgia (run by the party of former Prime Minister Zurab Noghaideli) and the People’s Party.

The Republicans and the New Rightists Party set up another alliance in late 2009. It was joined by Irakli Alasania’s newly established party in the beginning of 2010. Alasania is a former Georgian ambassador to the United Nations. But after the elections this coalition also collapsed.

The opposition tried to unite in the fall 2010, when preparations started for a new election code. There were eight opposition parties: The National Forum, the Conservatives, the Republicans, Our Georgia Free Democrats, Georgian Way, New Rightists Party, Christian Democrat Movement and People’s Party. But it only lasted for a few months. Then the New Rightists Party and the Christian Democrats agreed with the government on proposals which were unacceptable for the so-called Opposition Eight.

This consisted of: the National Democratic Party, Georgia’s Democrat Party and the European Democrats, which have single members in parliament today and are reviewed in alliance with Christian Democrats.

After 2008, former speaker of parliament Nino Burjanadze and Zurab Noghaideli set up separate parties. Noghaideli set up a bloc for the local election together with the conservatives and the People’s Party, which are today in Ivanishivli’s coalition.

Burjanadze and Noghaideli didn’t unite, but they made a statements that they would work to adjust Russia–Georgian relations and even visit Vladimir Putin after tge war in August, but with no results.

After 2010, Noghaideli disappeared from politics. In 2011, Burjanadze tried to unseat the government through street rallies. It ended with the violence of May 26, leading to at least four deaths.

In the fall of 2011, a new opposition formed. It was followed by the sudden appearance of billionaire businessman Bidzina Ivanishvili in Georgian politics.