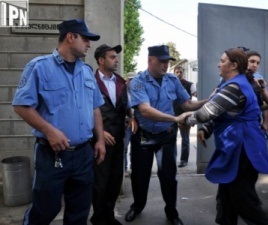 Authorities seized 300 000 sat dishes before they could be installed. Georgia's chief prosecutor ordered the police operation, which took place in Tbilisi and several other locations around the country. (IPN.)

The sat dishes were meant to let people watch Channel 9, which does not have a license to broadcast via ground-based transmitters.

Yesterday evening, police acted on a court ruling which said the opposition billionaire Bidzina Ivanishvili had illegally financed his Georgian Dream movement through one of his companies by providing the population with satellite recevers.

Police entered offices in Tbilisi and Kobuleti used by the company Elita Burji, which is affiliated with Ivanishvili, where sat dishes were stored for use by Global TV, a cable company run by Ivanishvili’s brother, and currently the only cable company that carries Channel 9.

Police also acted in Lanchkhuti, in the Guria region, in Telavi in eastern Georgia and in Samtredia, a small town in the Imereti region. The police operation lasted all night, and when it was over Friday at noon, Georgian Dream estimated that around 300 000 sat dishes had been taken.

“The government tries to prevent information reported by Channel 9 to reach the population,” Bekauri said yesterday, and vowed to take over the task of installing satellite dishes, which will take several weeks.

Channel 9 is affiliated with the opposition Georgian Dream movement and strongly critical towards the Saakashvili regime. Apart from the Internet, it is only able to reach viewers through satellite and the cable company Global TV. Other cable companies refuse to carry it. Furthermore, Global TV has run into trouble because the national TV channels Imedi and Rustavi 2 demanded to switch off their signals from its network. This is technically difficult and may require dismantling satellite dishes.

The Chief Prosecutor’s Office yesterday ordered the seizure of uninstalled satellite dishes belonging to Global TV until their investigation is finished.

When ordering the police action, the prosecutor was acting on information provided by the Chamber of Control, which went to court against Bidzina Ivanishvili for illegal use of private firms for election purposes. The court fined him 148 000 000 lari, later reduced by the appeals court to half of that amount, which corresponds to USD 45 million.

The prosecutor’s office said Friday that it had finished the seizure procedure, but the investigation continues.

Georgian Dream protested strongly against what had happened.

“The government’s goal is to maintain an information vacuum, which is created in terms of controlled television channels. It can not be ruled out that the next step by the government will be to close objective television channels, because it has finally crossed the red line and is acting in an illegal area by terror against democracy and freedom of speech,” the statement says.

The opposition coalition says it was illegal of the court to fine Ivanishvili for having a relation to Global TV, because the Chamber of Control did not provide proof for this.

The statement also recalls the recent arrest of Aleksandr Ronzhes, American co-owner of Global TV, who wasn’t released until the U.S. Consul came to the place of arrest.

Georgian Dream has informed foreign diplomats and calls on international organizations to react to what has happened.

Lawyers for Global TV will today appeal to the Appeals Court.

Deputy Interior Minister Eka Zghuladze said the coordinated police operation against satellite receivers has nothing to do with access to media.

“This is about a certain person having certain political ambitions transferring certain material property to voters for free as part of election agitation for a certain party, and accordingly about possible bribery of voters, which is a crime and is punishable by law.”

Transparency International Georgia said it is unclear why the court gave a permit for seizing the equipment, based on a suspicion that Ivanishvili’s goal was to bribe citizens by installing satellite dishes for free.

“The case raises the question if seizing of the property was appropriate: According to Article 151(2) of the Criminal Procedural Code, seizing property for preventing it to be used in a crime is only allowed if the property could be used to commit a very severe crime. Vote-buying, however, is punished with a maximum of three years in prison.”

TI Georgia considers it important to investigate any case of voters’ bribery, illegal party financing or corruption, but sanctions should be based on evidence and shouldn’t restrict the freedom of the media.

“Steps should be taken to ensure that actions are not perceived by the public as attacks against the media.”