The justice minister will no longer have added role as prosecutor

The justice minister will no longer have added role as prosecutor 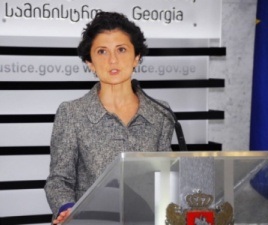 TBILISI, DFWatch–Georgia has taken away the justice minister’s added role as a prosecutor in a new regulation that came into force from Tuesday morning.

Speaking at a press conference, Justice Minister Thea Tsulukiani explained that before, as justice minister she had the power to detain and initiate criminal prosecution against the president, ambassadors, members of parliament, military officials, the head of the Supreme Court and other officials.

Only the Chief Prosecutor will have the right to do these things, and from now on she is prohibited from intervening in the activity of the Prosecutor’s Office.

“I believe that this autonomy will grant [the Prosecutor’s Office] the opportunity to be free of political grounds and to earn the trust of people very soon,” she said.

The amendments, which have been passed by parliament, were part of a legal reform which is being conducted by the new government. According to the new regulations, General Inspection of the Justice Ministry will split in two, which means that a new general inspection will be set up at Chief Prosecutor’s office, which as Tsulukiani says, will be responsible to control activity of prosecutors and if necessary punish them.