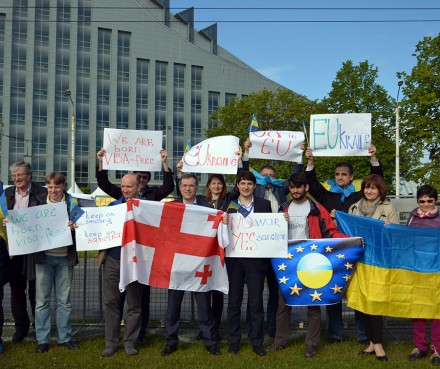 Members of the EaP Civil Society Forum From Georgia and Ukraine rallied in Riga demanding including in the Declaration European perspective for their countries and a visa-free travel to the EU.

The Eastern Partnership (EaP) summit in Riga did not bring unexpectedly good news to Georgia. The EU restated their support for Georgia’s European path and congratulated it on achieved progress. But Georgians will have to wait visa-free travels at least until the end of this year, when the EU officials will evaluate Georgia’s progress once more.

The EU membership is not on the table

As expected, the final declaration was not stronger than the one signed in Vilnius in 2013, which does not suggest that EaP is a road towards EU integration.

This was restated by German chancellor Angela Merkel in the beginning of the meeting: “The Eastern Partnership is not an instrument for enlargement of the European union, but it is an instrument of rapprochement with the European Union.”

As two years ago, the Riga summit again acknowledged the European aspirations of Georgia and other EaP countries. It reaffirmed the sovereign right of each partner freely to choose the level of ambition and the goals to which it aspires in its relations with the European Union” and stated that “it is for the EU and its sovereign partners to decide on how they want to proceed in their relations.” In other words, it means that the EaP is not a gateway to the EU partnership, and this step depends on bilateral talks.

The document also stressed that implementation of the Association Agreement and the DCFTA (Deep and Comprehensive Free Trade Area) acts are the top priority of the EU and its eastern partners.

Kornely Kakachia, political analyst and the head of the Georgian Institute of Politics, told DFWatch that he did not think the EU membership can be achieved in a short or even in a medium term.

“But Georgia and the region as a whole should have a hope to be a part of Greater Europe as such, even if short of membership. It is still important for the regional geopolitical context,” Kakachia said.

He thinks that Georgia’s EU membership odds depend on various factors, such as country’s performance and its relations with Russia, NATO, the US and other international actors. “Georgia has to do its homework and wait for a suitable geopolitical context. Pretty much the same way the Baltic states did,” Kakachia said.

As two years ago, the Riga summit again acknowledged the ‘European aspirations’ and ‘European choice’ of Georgia and other EaP countries. It also stressed that implementation of the Association Agreement and the DCFTA (Deep and Comprehensive Free Trade Area) acts are the top priority of the EU and its eastern partners.

The final declaration stated, that mobility of citizens remains a core objective of the EaP. It also said that the EU looks forward to Georgia and Ukraine to implement the 2nd phase of their Visa Liberalization Action Plans (VLAP) and to fulfill all remaining requirements by implementing needed reforms.

The European Commission expressed its support to these countries in the implementation process and promised to do another progress report by the end of 2015.

“Fulfillment of all benchmarks would allow to conclude the VLAP process and the Commission to propose to the European Parliament and to the Council to exempt Ukrainian and Georgian citizens respectively from the visa requirement in line with the criteria of the Regulation 539/2001, ” reads the document.

In a nutshell, the Riga declaration promises visa-free travel to Georgians and Ukrainians, but only if these countries carry out the remaining reforms. It does not give a specific date of possible visa liberalization, but allows to stipulate that it might happen in the end of 2015, if everything goes smoothly.

He added the declaration implies that the EU is not ready yet to discuss the visa-free regime with Ukraine and with Georgia in current geopolitical context.

Experts: the future will be more pragmatic

The European Union has been going through a review process of the whole European neighborhood policy since March 2015, which includes the EaP as well. The final review will come in October, or even later. But Riga summit most likely will not be the main turning point for the EaP project.

“It’s also important to understand that Riga is in the middle of a process that the European Union has launched in reviewing the whole European neighborhood policy, so Riga will not be the moment for looking at whether we should change the Eastern partnership or not. This is more of a stock-taking exercise, ” thinks Piere Vimont, a senior research associate at Carnegie Europe, whose research focuses on the European Neighborhood policy.

According to him and his colleagues from Carnegie Europe, in the future the EaP will get more pragmatic and more tailored to the specific needs of each of the six countries. Moreover, the Ukraine crisis, they say, left the EU puzzled: on one hand, there is even stronger commitment to the success of the EaP project, but on the other hand most of the European governments are more cautious with their actions eastward of the Union.

Should the EaP be split?

Kakachia also thinks that the EU should decouple Ukraine, Georgia and Moldova from Azerbaijan, Armenia and Belarus ‘the same way the West did with the Baltic states after the collapse of the USSR.’

“I think the EU has to think twice and keep delicate balance between Association trio and the rest in order not to alienate them,” he added.

However, Donald Tusk, the President of the European Council, told media that although the six countries need different tools and different approaches, he does not support splitting the EaP into two groups. “I hope that cooperation is possible in the current format,” he said in an interview to Rezonansi a day before the Summit opened.

As a spit in the face of the Georgian delegation, Mikheil Saakashvili, former Georgian president, was present in Riga as well, although as a private person. He participated in the meeting of the European People’s Party, an old-established partner of his United National Movement. The meeting was also attended by Latvia’s PM Laimdota Straujuma.

In Riga, Saakashvili gave an interview to the Georgian journalists, in which he strongly criticized the current government blaming them for caring more about his extradition than about achieving visa-free regime with the EU.

“This government does not care whether or not our citizens will be able to travel abroad without visas, because they themselves and their relatives freely travel on diplomatic passports, and relax in European resorts,” he said.

The Prosecutor’s office hasn’t specified whether they have asked Latvia to extradite the ex-president. Saakashvili is wanted in Georgia on several criminal charges, including abuse of power and embezzlement. The prosecutor’s office has issued an international search warrant for him in August 2014.