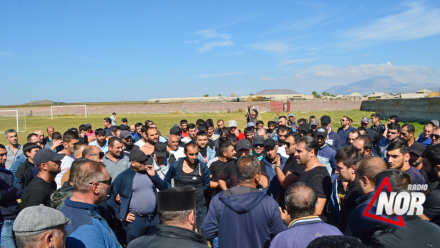 Registration of volunteers at Ninotsminda stadium. (Radio Nor)

Ongoing armed conflict between Azerbaijan and breakaway Nagorno-Karabakh has had strong repercussion in Georgia with its ethnic Armenian and Azerbaijan minorities. Both groups hold mass rallies in support of their ethnically kin states. People in Akhalkalaki and Ninotsminda, two municipalities in southern part of the country with formidable ethnic Armenian population, started Monday to mobilize “material and physical” resources to help Karabakh, A.K.A. Republic of Artsakh (formerly named Nagorno-Karabakh Republic).

Late night Monday, tensions erupted with Georgian border guards when a group of Georgia’s ethnic Armenian men tried to cross the state border. In a video published by Armenian news agency 365news.am, a group of dozens of men yelling in Armenian are barred by Georgian guards.

Earlier, Monday noon, at the Ninotsminda stadium local men started to register as volunteers “to go to Artsakh and support the Armenian people and soldiers”, Ninotsminda-based Radio Nor reports.

At about 3 pm similar rally of volunteers was held in Akhalkalaki stadium.

A group of young ethnic Azerbaijanis held a rally of solidarity to Azerbaijan in Tbilisi Monday. The rally started at the Heydar Aliyev statue in Ortachala, Tbilisi historical center, and continued at the Azerbaijan’s embassy.