Tension in Bolnisi after vote to impeach gamgebeli

Tension in Bolnisi after vote to impeach gamgebeli 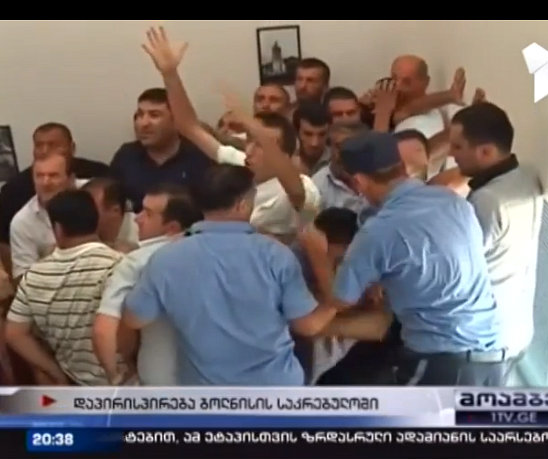 Conflict along political fault lines were brought to the surface in Bolnisi. (Channel One.)

TBILISI, DFWatch–There was tension outside Bolnisi municipality building on Monday when some members of the city council wanted to hold a secret ballot and impeach the new head of the municipality, who was appointed in January by the Georgian Dream coalition.

13 members of the local council supported impeaching Malhkaz Eradze, head of the council, but supporters of Eradze protested against this decision and demanded to be let into the session meeting.

Supporters of Eradze attempted to break down the door and attend the session, but were stopped by police.

The 13 council members were locked into one of the rooms of the municipality building and conducted the secret ballot. No-one was let in. They remained inside the room for several hours while supporters of Eradze stood outside.

It was a special session of the council on Monday, held because some of the council members wanted to impeach Eradze, who was appointed seven months ago.

The thirteen council members think Eradze is not properly fulfilling his duties and want him to resign; however their decision needs more votes and a final signature to be enforced.

The confrontation in Bolnisi started a few days ago. Eliso Khvedelidze, who represents the Georgian Dream coalition, told journalists that the new head, who replaced the previous head from the National Movement after the parliamentary election, is making decisions without consulting others and contradicts the decisions of the central government.

She said members of the council required to impeach him after new head decided without agreeing with council members to fire acting gamgebeli Levan Palavandishvili and appointed Murman Kurashvili as acting gamgebeli.

She added that Georgian Dream suspended Eradze’s party membership after the latest events.

Eradze and his supporters didn’t attend today’s session at the municipality. He said it was a provocation.

“Those are a band of criminals who gathered up there in the room and unfortunately some special services really help them in this,” he said.

Eradze and his supporters think Monday’s decision is not legal. He said the session had failed.

Georgian Dream coalition won the parliamentary election in October 2012, but the United National Movement won the local election in 2010. The next local election will only be held in 2014, but there are reports of firings and political pressure in local governments. United National Movement has since lost its majority in several large municipalities, including the capital Tbilisi, and Kutaisi, the second largest city.

In the beginning of August, there was tension at Bolnisi local government office, and locals demanded the acting gamgebeli’s resignation.