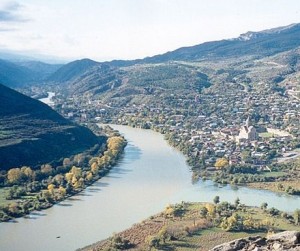 The river Mtkvari as it passes Mtskheta. (Photo: Doron.)

TBILISI, DFWatch – The Green Party claims a hydroelectric project in Turkey will divert too much water from Mtkvari, possibly creating serious environmental problems.

A low water level in the river Mtkvari may lead to epidemics, because sewage water from Tbilisi and Rustavi will then make up the main mass of water, the party claims.

Turkey is planning to build the Beshik Haya cascade reservoirs in Turkey’s Ardagani district. The Green Party claims this will redirect much of the water in the Mtkvari into the Black Sea instead of the Caspian Sea, where it runs today. This will lead to an ecological and economic catastrophe, according to leader Giorgi Gachechiladze.

The Green Party appeals to authorities of Georgia, Turkey and Azerbaijan, which also may become the victim of the project, not to let this project be implementated, because ‘an artificially created water deficit might cause tension between the states.’

The river Mtkvari is the biggest water artery in the South Caucasus and is very important for Georgia and Azerbaijan, the Green Party states.

Today the Georgian Minister of Environment Goga Khachidze said on Radio Liberty that the river Mtkvari will cross Georgian territory as today, but he also confirmed that there are negotiations between Georgia and Turkey.

“I can’t say yet what will be built and what will not,” he says, adding that nothing specific is yet decided.