Teacher in Georgia fired for not loving Saakashvili

Teacher in Georgia fired for not loving Saakashvili 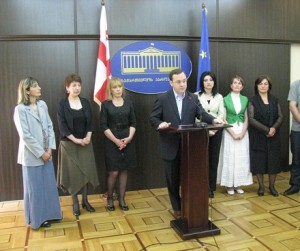 One of the teachers was fired because she didn't love Georgian president Mikheil Saakashvili. (Photo: Rusiko Machaidze.)

TBILISI, DFWatch – Teachers are suffering political discrimination in Georgia ahead of an important election.

Only in Shida Kartli, a region bordering on South Ossetia, 21 teachers were fired because their family members supported or were member of the largest opposition party, Georgian Dream.

Giorgi Tsagareishvili, who represents the opposition Free Democrats in parliament briefed media about the situation at a press conference in parliament on Monday. He was joined by the fired teachers Nani Ivanishvili, Maya Tskhadashvili, Ketevan Kharazishvili, Tsitsino Javakhishvili, Ia Bzhalava, Maguli Besiashvili and wife and husband Nodar Kilandze and Natela Nozadz. They said they were fired because their husband or wives were members of the Free Democrats Party.

Giorgi Beruashvili, former employee of Privat-Bank in Kareli, a village in Shida Kartli, was fired only because his sister and mother were attending a Georgian Dream meeting.

He told Df Watch that he was considered as one of the bank’s most valued employees before that presentation, and no one had ever mentioned that he was in danger of being fired. But the day after the presentation, he was told that he was fired, because ‘members of his family think in an opposition way.’

Tsisana Javakhishvili says she was the only biology teacher at the public school in the village Nikozi near Gori. She was fired only because she held different views; her husband participated in the local elections in 2010, representing the Free Democrats.

The official reason for her firing was lack of experience. But it later emerged that the headmaster directly told her she had to leave her job because of the political views of her husband, because ‘he didn’t need an oppositional

Giorgi Tsagareishvili added that Javakhishvili took the case to court. During the trial, the headmaster, Tamaz Melanashvili, said: “I fired her because she doesn’t love Mikheil Saakashvili.”

Ia Bzhalava, who is a certified teacher, was teaching Georgian literature and grammar at the ninth public school in Gori. Her husband is a member of the Free Democrats, and that became a reason to fire her in January.

“Former school headmaster Marine Makharashvili told me that they were categorically demanding that she fire me. We met Zurab Arsoshvili, chair of education resource center and governor by that time regarding this issue. He made us hope that he wouldn’t have let unfair harassment of person, but general inspection entered the school. Based on its conclusion, Marine Makharashvili was also fired. But in fact, I was the reason to this. Headmaster Elene Khachidze, who was appointed only three weeks ago, fired me, while she didn’t even know me,” Bzhalava remembers.

She also notes that her family is deliberately persecuted and she fears for the safety of her four sons.

DF Watch contacted the education ministry for a comment as to why the teachers were fired, but its press office told us that ‘the ministry doesn’t do comments on issues like this.’