Tbilisoba: what treats an old city can offer

Tbilisoba: what treats an old city can offer 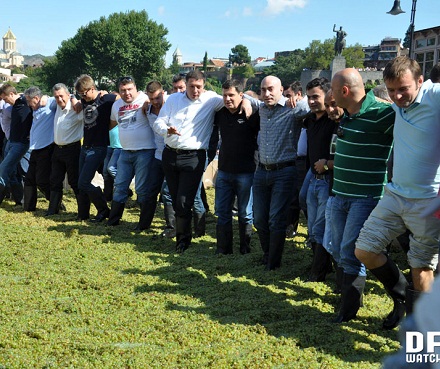 Anyone can put on rubber boots and get involved in wine pressing. (DFWatch.)

TBILISI, DFWatch — Georgia’s capital last weekend was the scene of elaborate display of handicraft, winemaking, food and fun, as the annual celebration Tbilisoba as usual drew large crowds to engage in various aspects of Georgian traditional ways of life.

Tbilisoba has been celebrated almost every year since 1979, except for a five year hiatus in the 1990s.

It has traditionally been celebrated the last weekend of October, but for the last two years the festival has been held in mid-October.

As usual, it spanned from Friday to Sunday and presented various cultural events, mostly in the older parts of Tbilisi, an area with a very long history.

This year’s celebration started on Friday with an exhibition of periodicals from the last century. A concert was held at the National Library. Later, another exhibition was held of unknown photos of well-known Georgian artists.

Saturday morning, a large wine press was installed on Gorgasali Square, where everyone who wanted could put on rubber boots and help pressing grapes.

“This is my favorite process and event at this celebration,” Vakho tells us. He says that every year he brings his family to Tbilisoba from Rustavi, a small town near the capital, to participate in various cultural and traditional events, especially wine pressing.

“My children love this, and I, as an old Georgian, know and enjoy making wine in home conditions and here, where so many people are allowed to participate making delicious Georgian wine.”

In the wine press there were seen a lot of foreigners taking photos of participating in this historical events.

By afternoon Gigi Ugulava, Mayor of Tbilisi came to the square with Tbilisi Council staff.

“We have many programs, many projects, which we are implementing. It didn’t have any relation to the election. Of course City Hall and the local government continue working. The population has many problems and we are taking care to solve them,” he said.

The mayor participated in wine pressing against the background of traditional Georgian music. He congratulated people gathered at Tbilisoba, wishing peace and development.

The whole weekend, popular Georgian choirs and dancing ensembles entertained people in the capital including Ensemble Rustavi and Erisioni.

On one of the bridges across the river Mtkvari there was organized a auto show displaying both new and old cars.

As a tradition cafes and restaurants display an assortment of fruits at the entrances, while City Hall organizes large fruit festival. A large amount of various types of fruits are displayed for everyone to freely take and eat.

Small events are held in almost every corner, like street performance, entertainments for children, painting corners, selling and displaying handicrafts and various exhibitions.

At Rike Square, old Georgian sport games were presented, while a brand new cable car was taking passengers for free so everyone who wanted could see the capital from the small cabin taking them to the old castle of Narikala, which was built in the fourth century and is one of the important landmarks in Tbilisi.

There was a wine festival and a tea festival.

“Tasting Georgian wine – this can be a single reason for me to come to Georgia,” a guest from Poland told us. “I’ve been here a couple of time, but the first time attending this event and it’s amazing, amazing things everywhere,” he said as he was getting ready to put on rubber boots to take part in wine pressing.

Meanwhile, Tbilisi City Hall ended the project to rebuild a place, where an ancient military wall was discovered.

There used to be a simple road for cars and buses, on one side with shops and bakeries, and ordinary buildings on the other side. But the place now looks like a small park for recreation where one may step down through the layers of earth and observe the ancient walls, which used to be one of the entrances to the city, at a time in history when it marked the end of the populated area.

The place has become a crossing of ancient and modern history displaying old architectural buildings and new ones.