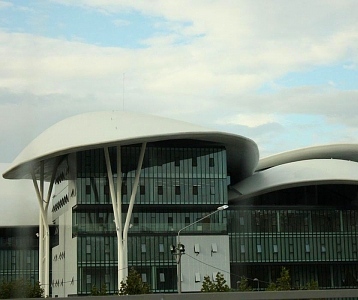 TBILISI, DFWatch–Tbilisi’s futuristic House of Justice has once again run into difficulties, this time because cracks appeared on one of its trademark “petals”.

People will be restricted from walking under the damaged area from August 25 because of the danger, the Ministry of Justice said in a statement on Tuesday.

The decision was taken after the National Forensic Bureau and two private companies concluded that there are cracks, building materials are inflated and water is leaking into one of the eleven “petals” that make up the flower-shaped roof.

The ministry says the faults are due to violations and vulnerabilities while the building was constructed. “There is violation of the required distance between the frame profiles (more than the standard) etc,” the statement reads, recommending repair work to start as soon as possible to make it safe to walk in the yard. This work will start on Tuesday.

This is not the first time it has been necessary to carry out repairs on Tbilisi’s House of Justice. In December, 2013, roof plates flew off in a storm and it had to shut down for several months. Then in January-April, 2014, the seventh “petal” had to be repaired.

The ministry blames violations when the building was constructed and says there is work going on now every day to improve vulnerabilities on all eleven petals, a process which will cost 1.1 million laris. Another element of this is to identify further violations of standards in the building.

The House of Justice in Tbilisi lies next to the River Mtkvari and was built while Zurab Adeishvili was minister. It is a popular building which has been mentioned in international publications about architecture.

Construction of the House of Justice began in March, 2012, and finished 6 months later. It cost USD 61 million and was built by Huachuan Georgia Ltd, a Chinese state-owned company.