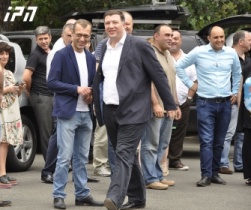 In a statement the Finance Ministry’s investigative service says the company CT Park Ltd, which hires parking inspectors and collects parking fees, was given an undue advantage in a contract with Tbilici City Hall signed December 07, 2007.

The contract says the company gets 40 percent of the money collected on parking fees, and the rest is transferred to the city. But according to law, 40 percent of such fees should go to the state budget, and 60 to the local authorities.

On April 6, 2011, there was another agreement signed between the company and Tbilisi City Hall, according to which CT-Park received 3 lari ( USD 1.60) from each of the fines paid by Tbilisians, in addition to the 40 percent.

After leaving the office of the investigative service, Ugulava called the new charges absurd.

“They haven’t even given me the charges in the case. They are absolutely unprepared and they don’t even know what they know,” Ugulava said and drew attention to a recent moratorium announced by the government on April 14 ahead of the local election and said they have violated it by charging him right before the second round of the election.

He further claimed the case is being brought in order to improve Georgian Dream candidate Davit Narmania’s chances in a run-off election for Tbilisi mayor in mid July.

Ugulava, who is also facing a corruption trial involving the company which maintained parks and public spaces while he was mayor, claimed that no-one is guilty in this latest case and no-one has committed a crime and that the charges are unreasonable.

Monday Giorgi Grdzelishvili, head of the investigation service’s press office, said Ugulava is trying to distract attention from the case by bringing up the moratorium issue. He said the service has information that Ugulava was planning to leave the country without notifying the court or investigative bodies, as he is charged in other cases too.

When the former mayor was notified that he was being summoned to the investigation service, he said he was not coming because he had business meetings abroad, but later he changed his mind and came to the service Monday.

Justice Minister Thea Tsulukiani, underlined that the moratorium is not a form of immunity or privilege, and said the new charges against Ugulava will be brought up at a meeting Tuesday of the interagency commission on elections, which she heads.