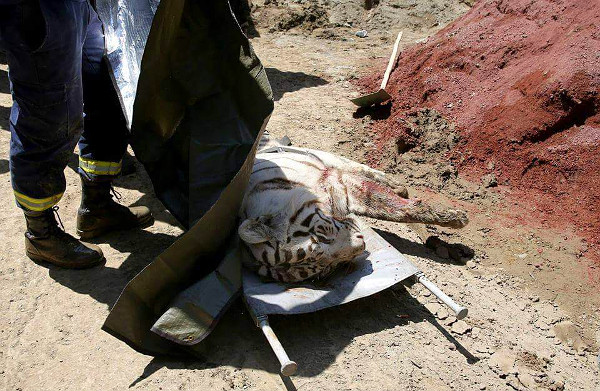 TBILISI, DFWatch–As Tbilisi reels from the shock of a tiger attack which killed one man in a warehouse around noon today, a bear and a hyena may still be on loose in a city with a million inhabitants.

The man who was killed by an escaped zoo tiger has been identified as a worker at a warehouse in the Laguna Vere compound, a few hundred meters from the zoo which was destroyed in a flood June 14.

The man, who was about 40 years old, was severely injured and taken to the Republican Hospital, but doctors couldn’t save him. Doctors said he had injuries in the neck, damaging the carotid artery.

Minister of Internal Affairs Vakhtang Gomelauri, as well as the head of the Security and Crisis Management Council Mindia Janelidze, both said they relied on information given by the zoo two days ago, that no animals were out in the streets.

But yesterday evening, the zoo’s management issued a statement saying that a white tiger, a bear and a hyena were still absent. After the tiger has now appeared, this means a bear and a hyena may still be on loose in a city with a million inhabitants.

When witnesses first said they saw the attack today, they identified the animal as a lion. This prompted zoo director Zurab Gurielidze, who was live on GDS TV, to say that all the lions were dead.

Later, he arrived at Laguna Vere, where snipers had just put down the animal, and left the area without commenting to the media.

The dead tiger from today’s attack has now been taken away by emergency responders.

According to witnesses, seven workers were cleaning up a warehouse inside a factory building in small rooms when the attack happened. When the tiger went for one of the workers, the others made noise and broke a window, after which the tiger ran away.

Mayor Davit Narmania said there will be an investigation to determine who was responsible for the incident.