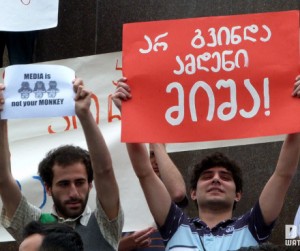 A demonstration against another suspicous prison death met and merged with a demonstration for free media at Rustaveli metro station Thursday. (Photo: Mari Nikuradze.)

TBILISI, DFWatch – People gathered in front of parliament Thursday to protest against mistreatment of prisoners, spurred by the news of another death of a prisoner who bore signs of having been beaten.

Police reported that the prisoner died of a heart attack, but photos of the corpse show injuries, which may indicate that he had been tortured.

A group of students gathered in front of the parliament building holding posters saying they demand an investigation of a number of prison deaths this year.

“The prison minister should resign,” the protesters said, and refer to the latest annual report from the country’s Public Defender, which documents a development which gives reason for concern.

Despite heavy rain, protesters started their demonstration down Tbilisi’s main street, Rustaveli Ave. They joined another rally near Rustavli metro station which was dedicated to World Press Freedom Day.

Local non-governmental organizations (NGOs) and media representatives brought large posters. Some of them read ‘we need media, not comedy’; ‘we deserve free media,’ ‘Public Broadcaster! Broadcast about death of prisoners at prison’ and ‘we don’t need so many Misha.’

Students from Academy of Art made a short performance: all dressed in black clothes slowly walking approached the place of protest holding a large funeral bouquet. They brought the flowers to a makeshift symbolic tombstone, on which there was written media and drawn clip art of the broadcasting tower of Tbilisi.

They stood in silence near the tombstone for about fifteen minutes.

The rally lasted for more than an hour. It was organized within the recently started civic campaign for solidarity.

The same day, the Prison Ministry released a statement about the death of Zurab Delianidze, saying that the ministry did not wish to report about th edetails of the prisoner’s health condition, but due to the great public interest, they decided to publish some more information.

According to the ministry’s statement, the prisoner had a severe form of venereal disease and he was receiving appropriate medical treatment at hospital.

On May 1, when he died, the investigation department within the ministry started an investigation, and a medical inquest was scheduled. The ministry thinks the incident requires a detailed study, but preliminary indications are that what is indicated in the images is something called cadaver spots and traces caused by morbidity.