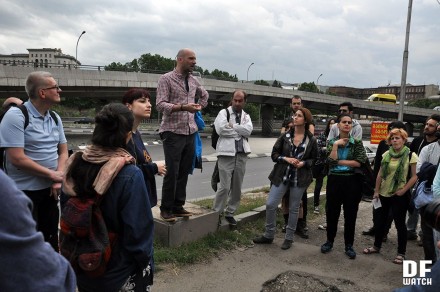 Tbilisi, DFWatch – About thirty people, Tbilisians as well as number of foreigners, gathered on Sunday to take an unusual tour of the capital – Tbilisi Ugly Walk – which was aimed at exposing the city’s recent architectural history with three different political periods – ‘Shevardnadze Era’ (1993-2003), ‘Saakashvili Era’ (2003-2012) and ‘Ivanishvili Era” (2012 to present).

Irakli Zhvania, architect and urban planner, carried out the tour organized by ‘Iare Pekhit’ (‘Walk’), a green activist group focused on Tbilisi urban problems. The tour started from Vera district and ended on a bridge near Eliava Bazaar, just on opposite bank of Mtkvari from the Tbilisi City Hall.

The major goal of the event was to show how unplanned development negatively affects Tbilisi aesthetics, ecology, socialization and transport.

As the organizers of the tour say Georgia’s capital attracts many tourists for the blended architectural styles of the East and the West.

“But in recent years city image has been changing significantly and we see more and more urban jungles of concrete high raised buildings devoid of any architectural values,” the group states on its Facebook.

Irakli Zhvania said that once Vera, a historical district in Tbilisi center, was probably the most popular and the most expensive place to buy an apartment, but since construction companies rushed in to build houses without any architectural or urban considerations, Vera has lost its popularity because there are no recreation zones; there is no space between the houses.

Zhvania said that unrestricted and haphazard constructions negatively affected socialization among Vera residents too, as well ecology, as Mtatsminda’s famous breeze during hot summer nights is no more available here.

One of the stops during the tour was behind the Sports Palace, often referred as ‘concrete jungle’, some call it for it overcrowding also as ‘Gaza Strip’.

“Nowadays pieces of land are sold like cheese in bazaar,” – Zhvania said adding that the authorities has always walked back in their treatment with investors even if they had evidently disfeature the city.

It also can be ironical that right in the middle of the ‘concrete jungle’ is a flat of Tbilisi Mayor Davit Narmania, who permanently resides there. Also oddly enough the office of the Tbilisi City Hall is buried among ugly and unfinished constructions on Saakadze Square, two bus stops away of the ‘Gaza Strip’.