Tbilisi super cup heats up an old debate in Abkhazia

Tbilisi super cup heats up an old debate in Abkhazia 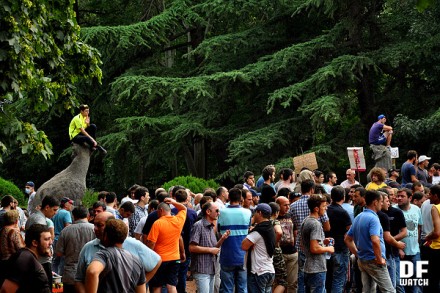 A group of Abkhaz football fans faced harsh criticism in Abkhazia for travelling to Tbilisi for  the UEFA Super Cup.

The UEFA Super Cup football match between Spanish teams, Barcelona and Sevilla, was arguably the hottest sport event that took place in Georgia this summer. More than 50,000 local and international guests attended the football giants’ spectacle unfold on Boris Paichadze Dinamo Arena in Tbilisi on  August 11.

The fact that the game was also attended by an unspecified number of Abkhaz football fans caused a major controversy in the breakaway republic and brought up the old debate regarding the ethics of travelling to Georgia-controlled territory for personal purposes such as entertainment, trade, or medical treatment.

Aruaa (‘Soldiers’), an organisation of 1992-93 war veterans, issued an open statement in which it accused Abkhaz who travelled to Tbilisi in order to watch the match of ‘cynicism and disrespect for the memory of victims [of the war]’ and ‘insulting the memory of those who died for Freedom of Apsny [Abkhazia]’.

The fact that the match took place on the eve of 14 August, which is known in Abkhazia as the ‘Memorial Day of Defenders of the Fatherland’ provides additional context for the dispute.

“The war left a lot of problems such as family separation and other humanitarian concerns, but we always opposed trips to the enemy state, even for treatment. But a trip to Georgia to watch a football match is like spitting to the Abkhazia’s entire multi-ethnic nation, which determined its attitude to the current fascist regime of the Georgian state as early as in August 1992,” Aruaa’s statement reads.

The Abkhazian discourse of Georgia as an ‘enemy state’ has roots not only in the war and the developments of past 23 years, but also in the fact that two sides never signed the much-discussed agreement on non-use of force, not to mention a peace agreement.

In view of the Sokhumi de facto government, independent Abkhazia is in a state of war with Georgia, while the Georgian government has refused to recognise the Abkhazian government as a legitimate signatory of such potential agreements viewing Abkhazia as a part of Georgia’s territory.

Inal Hashyg, editor-in-chief of newspaper Chegemskaya Pravda, stated that ‘[i]t’s necessary, of course, to love football, but I think that it wasn’t worth for our young people to go to the match in Tbilisi. It is necessary to take into account the existing realities and the fact that we are still at war. It wasn’t worth to disregard the enormous sacrifices, which our nation suffered, in order to see Lionel Messi. I wouldn’t like to see these guys declared traitors, but one still has to think before committing such an act’.

De facto president of Abkhazia Raul Hajymba decried the ‘progressing decay of patriotism’ and stated that State Security Service was already ‘dealing’ with people who travelled to Tbilisi.

At the same time Mr Hajymba concluded that the import of goods from Georgia should either be terminated or controlled by the state. Unofficial import of cheaper agricultural produce from Georgia-controlled territory to Abkhazia is often a source of income for eastern Abkhazia’s Georgian community.

Another argument often recalled by commentators was the Georgian embargo and Georgian policy of thwarting Abkhazian efforts at participating in international cultural and sport events as an independent state under the Abkhazian flag.