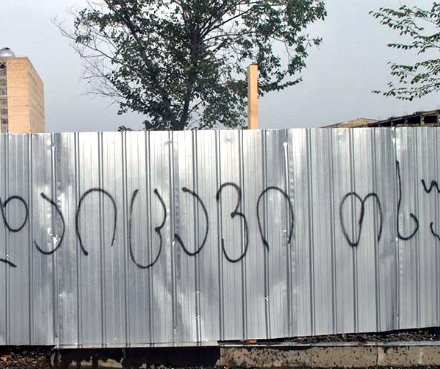 TBILISI, DFWatch–Students demonstrated Monday against the construction of a new petrol station on an area that is part of Tbilisi State University.

The company claims it owns all rights to the land and is not violating any law by building the gas station.

Led by a group called ‘Protect TSU’, students marched from the main building of the university to the Ministry of Economy, where they demanded a reaction to the construction, which they think is not proper near an educational facility.

Students think that the government should find an alternative location for the construction of the petrol station.

Irakli Kupradze, one of the organizers, told DF Watch that they learned about the construction when the company fenced off the area and a minibus stop was moved far from the university so students had problems because of that. This happened in the beginning of October.

During this period, students met with the representatives of Tbilisi City Hall and the economy minister. The Tbilisi mayor promised to put together a working group and publicly discuss this issue, but the promise wasn’t fulfilled and there was a pointless meeting at the ministry as well.

“Deputy Minister Dimitry Kumsishvili agreed to meet us at 10:00 and he was an hour and a half late,” he told us. “This says everything about their attitude towards students and the university.”

The company Gazvil, which is constructing the petrol station, said in a statement the same day that they are ready to meet with the students and representatives of the university They claim that they purchased the land for one million lari at an auction organized by the Economy Ministry.

“The condition of the auction was to invest an additional 1.5 million. We have already invested 1,150,000. We spent nine months to get permission for the construction, while two months should be enough,” they say, adding that they’ve spent more than two million.

But still they are ready to talk with the students. Kupradze says they’ve heard claims that the company wants to meet them and no-one responded when they asked for a meeting with the company, but if the company is in fact ready to meet, students will meet them.

Students from the Academy of Arts on Monday expressed solidarity with TSU students and joined the demonstration.