TBILISI, DFWatch–Tbilisi residents are mobilizing to help victims of the flood via social media, people are encouraged to volunteer and to donate money or things needed. 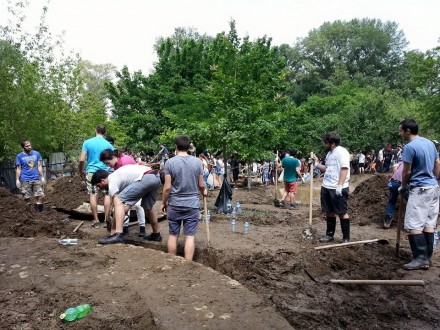 A Facebook group 13 June – Volunteers currently have over 12,000 members, and the number is still growing. They have mobilized people to come to Mziuri park, Tamarashvili street and to Svanidze street, parts of central Tbilisi badly hit by the flood.

The flood left over 40 families homeless. 12 people had died and more are still missing.

According to the volunteer group, these families need personal hygiene items, including diapers, first aid items and medicine, as well as nonperishables (pasta, rice, sugar etc.) It can be delivered straight to them or to collection points in Vake, Saburtalo, Mtatsminda, Chugureti, Didube, Nadzaladevi, Gldani, Krtsanisi, Isani, Samgori districts’ gamgeobas.

Animals got hit by the flood as well. Around 55 dogs are sheltered near the St. Nino church at the Vake-Saburtalo cemetery and the caretakers are asking for food donations.

There are also a few on-line donation campaigns collecting money for the damages that flood has caused. A newly established Tbilisi Hippo Fund will collect money for people, who lost their homes, and for animal shelters as well.

An IndieGoGo campaign has already raised over 16000 USD. Their funds will go towards covering the flood damage, which, according to Tbilisi mayor Davit Narmania, is ‘tens of millions of lari’.

Another option to donate is through the Red Cross of Georgia.

Also, special accounts have been opened in TBC and in Liberty banks for both local and international donations.