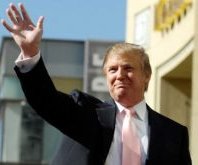 TBILISI, DFWatch–Georgian leaders congratulated Donald Trump with being elected as president of the United States, while political analysts in Tbilisi tried to predict how the result will affect US-Georgian relations.

Georgian Dream parliamentarian Gia Volski said it is unlikely that US-Georgia relations will be weakened.

“It is not about traditional personal or human relations, it is about strategic pragmatism, which is characteristic for the US in case of any president, whether it is a Republican or a Democrat,” Volski said.

Gigi Tsereteli from the National Movement is confident that the US is a strong country with strong institutions, which will ensure that there is no significant deviation in its policy toward Georgia.

“I think that there is no danger that anything will change with Georgia. On the contrary, we should expect active economic relations,” Tsereteli predicted, and added that it is unique that a businessman with no political experience reaches the top in the US.

Davit Berdzenishvili from the Republican Party told journalists that his party supported Hillary Clinton, but there is no risk that Georgia will be abandoned in the face of Russian aggression.

“We had an expectation that Clinton would win because we are Georgian politicians and unlike Trump, Hillary Clinton has not said anything to praise Putin,” he told Newspost.

Labor Party leader Shalva Natelashvili says it is a mistake if anyone thinks that Trump was elected because he is a billionaire.

“This man is a writer, a playwright, intellectual and politician – unlike Bidzina Ivanishvhili.”

Some of the politicians responded to the US election on their Facebook page. One of them was Salome Zourabichvili, former foreign minister and future MP. She wrote that she was shocked with Trump’s victory and thinks it may detrimental to Georgia because of his declared positive attitude to Putin and lack of a clear position on Russian aggression, his vague vision for NATO and EU, rejecting climate change, a promise to abolish nuclear agreement with Iran, harsh restrictions on immigrants and xenophobic statements.

“All of this and his populist and completely unpredictable reactions in crisis situations is a small list of factors which may have a serious impact on Georgia,” she wrote on Facebook.

“Neither congress nor the senate can balance his unlimited power.”

Iago Khvichia from the party Girchi wrote that America now has to count on its Constitution.

“The President of the US is now a man who once had dinner with [ex-President Mikheil Saakashvili] and is a next door neighbor on the Seychelles Islands,” Davit Zurabishvili writes.

Zaza Bibilashvili from the UNM writes that there is a difficult year ahead until “this genius” acknowledges that Putin is an enemy.