Tbilisi Pride canceled due to safety breach but conservatives gather regardless

Tbilisi Pride canceled due to safety breach but conservatives gather regardless 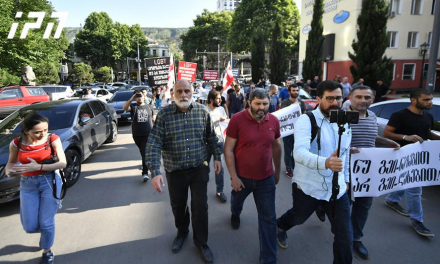 Aleksandre Palavandishvili, one of the spokespersons for socially conservative activists who are trying to prevent Tbilisi Pride. (Interpressnews.)

TBILISI, DFWatch–Organizers of Tbilisi Pride called off the queer rights march after the location was revealed online, but opponents were suspicious and mobilized anyway.

The first gay rights march in the Caucasus was originally planned for June but postponed due to anti-government protests that turned violent.

Monday was set as new date for Tbilisi Pride, which would be the first of its kind in the Caucasus region, where resistance is strong to open manifestations of queer lifestyle, but organizers called it off in the last minute, after the location of the gathering was revealed.

Earlier, Georgia’s Ministry of Internal Affairs said police could not guarantee the safety of participants if the event took place outdoors.

Monday morning, religious activists gathered at several locations around Tbilisi, urged on by millionaire businessman Levan Vasadze, who earlier called for the formation of vigilante patrols.

The conservatives distrust the announcement that LGBT rights march has been canceled and mobilized in front of the Ministry of Internal Affairs building, which was the planned location of Tbilisi Pride. Another group of anti-queer activists showed up at Republic Square, planning to march toward Vere Park, according to Interpressnews.

“Pride is not officially postponed, they are reacting to our protest. We came here and that’s why [they canceled],” said Aleksandre Palavandishvili, one of the spokespersons of the conservative activists.

In May 2013, a small queer rights gathering in Tbilisi was violently attacked by thousands of religious and socially conservatives.