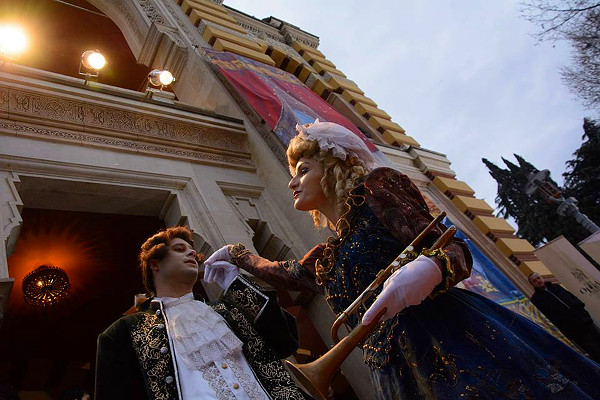 Protesters who had gathered at the entrance did not like the policy to not have tickets for the opening on sale but restrict attendance to invited guests.

They also criticized the mink coats worn by some of the guests and some of the decorations, holding posters which read “leaders require invitations”; a reference to how things worked during the Soviet Union.

They watched the ceremony on a monitor installed outside the entrance and made fun of some of the guests who wore Russian style mink coats.

“These kinds of events are usually attended by government officials and their associates. This used to happen in the Soviet Union,” Ninia Kakabadze, one of the protesters, told journalists. Georgia needs to get rid of it if it aims to become a civilized country, she added.

The opening performance was Abesalom and Eteri, an opera written by Zakaria Paliashvili.

There was a red carpet event one hour before it started. Among the guests were the Patriarch, cabinet members, critics and diplomats.

Prime Minister Giorgi Kvirikashvili apologized to people who had wanted to attend but weren’t able to.

“I also want to thank a citizen of Georgia, Bidzina Ivanishvili, who did such an important thing for Georgia,” he said, referring to the former prime minister and billionaire whose Fund Cartu financed the rehabilitation, which cost about USD 40 million and lasted more than five years.