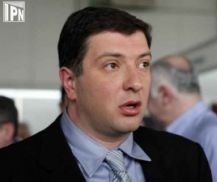 TBILISI, DFWatch–A decision by the city court to suspend Tbilisi Mayor Gigi Ugulava pending a corruption trial has been upheld in the Appeals Court.

Later, the court also suspended him because it would would interfere with the investigation if he remained in office until the trial.

Ugulava is charged with embezzlement.. According to investigators he cooperated with other City Hall employees in using money meant for refurbishing the capital to finance the National Movement’s election campaign in 2012.