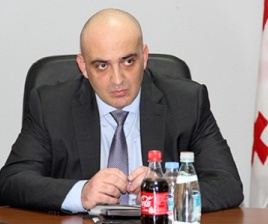 TBILISI, DFWatch–The National Movement Party in Georgia has exposed that the Chief Prosecutor was convicted of robbery in Germany in 2001.

Otar Partskhaladze confirms that he had certain incident with police in Germany, but claims that he was not subject to coercive measures.

UNM members demand his removal from the office until all questions are answered, while the Prosecutor’s Office claims the party is running a smear campaign.

Tbilisi Mayor Gigi Ugulava, who a few days ago was suspended pending a corruption trial, on Monday held briefing to say that Chief Prosecutor Partskhaladze was convicted for robbery in Germany in 2001 and the court there ruled that he could not hold any official post until August 2016.

Ugulava said it would be right to remove Partskhaladze from office until people get answers to all questions. He said Partskaladze in 2001 was convicted under the German Criminal Code in Augsburg for robbery and sentenced to one year and three months in prison in Augsburg. The sentence also prohibited him from holding an official post until August 22, 2016.

But Partskaladze’s lawyer Kakhi Kakhishvili, who works for the organization Election and Political Technologies Research Center, explains to DF Watch that his client would be prohibition from holding an official post in Germany if he was a citizen of Germany. Such a prohibition determined by Germany cannot have force in Georgia.

“This is a legal issue. But on the other hand there is a moral responsibility; that is why it is necessary for the government to react immediately.”

Tuesday evening Partskhaladze explained that he had an incident with police in Germany in 2000, but he also writes that the conflict did not lead to any coercive measures for him.

The policeman had information about a crime committed by another person, but made mistake, he writes.

“He physically insulted me and a conflict took place in a public place,” he writes, adding that the court found him guilty of arguing with police.

He says that the incident didn’t cause his deportation from Germany or any other coercive measures. He has been to Germany many times after this incident and never had any problems.

National Movement members demand that the minister of justice requests details of this case from Germany. However, the minister is on vacation right now and it is not known when she will return.

The statement reads that since the office started active investigation of activities in a number of well-known criminal cases, which resulted in responsibility for former government officials, including Gigi Ugulava, the National Movement started engaging in political blackmail and began a campaign to discredit the chief prosecutor.

The first such attempt was when former Interior Minister Vano Merabishvili, who is in detention, said in the courtroom that he was brought out from his cell at night and taken to meet with Partskhaladze and that the latter blackmailed him.

Kakha Kozhoridze, who is chairman of Georgian Young Lawyer’s Association (GYLA), says that Partskhaladze cannot be prohibited from holding an official post even if he was convicted in 2001, because enough time has passed for the conviction to be nullified according to Georgian legislation.

GYLA, as well as several other organizations and media outlets, have been aware of this issue for the last couple of months, but say they didn’t publish it because they wanted to check the information with court in Augsburg.

There is a short biography of Partskhaladze on the website of the Prosecutor’s Office which reads that from 2008 to 2013 he had a successful career at the Finance Ministry and used to be investigator-inspector of the investigative department. Before 2008, he worked at the Interior Ministry.

There have been questions about Otar Partskhaladze before, because according to his biography he graduated from a university in 1995 which was opened in December of 1995. The government has never explained this detail.

When Partskhaladze worked at the Finance Ministry’s Investigation Service, in summer when there was a meeting of NATO ministers in Tbilisi, employees of Tbilisi City Hall were detained several times a day and then released.

His name is also related to the dismantling of a minaret in the Georgian village Chela because of unconfirmed financial violations, an action which caused protests.

In his statement, Partskhaladze published a scanned diploma from the university he graduated from.