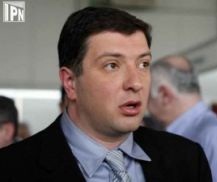 Tbilisi Mayor Gigi Ugulava has created a new security force, to protect properties and assets owned by the city. (IPN.)

TBILISI, DFWatch — The mayor of Georgia’s capital Tbilisi has decided to set up a new security force.

Mayor Gigi Ugulava has signed a protocol about setting up the service, which has already been published on Georgia’s legislative website Matsne, which means thatthe  new regulation is already in force.

But the security service employees in case of need are also obliged to provide security for the Mayor, the Chair of Tbilisi Council and other officials; they must prevent any kinds of violations at all these sites and react fast in case of disorder.

The service must provide the mayor information about the situation at these places after monitoring all departments in the new service. Security employees will also guard events organized by city hall, to prepare training programs for new employees.

Irakli Baesadze, head of Tbilisi City Hall judiciary service, told journalists that establishing the service will provide an opportunity to better protect property and save expenses spent in this area. He explained that employees of the new service will not be allowed to carry weapons.

The new service is financed over the budget of the city of Tbilisi.