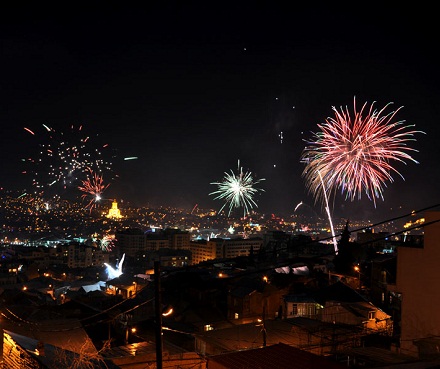 Fireworks over Tbilisi December 31, 2012 as seen from Mtatsminda. (Mari Nikuradze.)

TBILISI, DFWatch — 2012 ended differently than previous years for Tbilisians, as there was no concert or other event organized in the center of the city on New Year’s Eve.

Mayor Gigi Ugulava said the reason is that people don’t like outside concerts and therefore City Hall decided not to organize one this year.

Every December 31 since the rose revolution in 2003, there has been organized different shows and concerts on Freedom Square or Meidani in the center of Tbilisi, accompanied by grand fireworks. Usually Rustaveli Avenue, the city’s main thoroughfare, has been blocked off during the last days of the year in order to organize Christmas markets and exhibitions.

This year, traditional Christmas decorations were installed, while a 25 meters tall tree as usual standing in front of the old parliament building on Rustaveli Street. There were no grand fireworks, but at midnight people lighted their own fireworks. Many gathered in the streets of central Tbilisi.

Ugulava spent New Year’s Eve together with homeless people, who currently live in the former hospital building at the central railway station.

President Mikheil Saakashvili spent the evening of the 31th together with Georgian soldiers serving as part of the ISAF mission in Afghanistan. He awarded eleven medals of honor for professionalism, bravery and perfect fulfillment of duties, and spoke about his new initiative by which family members of a soldier who dies in Afghanistan will receive permanent pension together with compensation.

The body of Giorgi Kikadze, the nineteenth Georgian soldier to die in Afghanistan, was brought to Georgia in the evening of December 31.