Tbilisi does not recognize Crimea referendum

Tbilisi does not recognize Crimea referendum 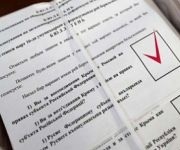 TBILISI, DFWatch–Tbilisi does not recognize the referendum in Crimea, according to a statement released by the Foreign Affairs Ministry Sunday evening.

The statement says the referendum was conducted as a result of Russian pressure of armed forces and in violation of internationally recognized principles and the legislation of Ukraine.

“Russia’s attempt to annex Crimea represents a blatant violation of the commitments it has undertaken both under multilateral and bilateral agreements,” the statement reads.

“The Georgian Foreign Ministry unequivocally reaffirms its support for Ukraine’s sovereignty and territorial integrity within its internationally recognized borders and calls upon the international community to consolidate efforts to make the Russian Federation order its troops back to base, to immediately de-escalate the situation in Crimea as well as in other regions of Ukraine, to enter into direct talks with the Ukrainian authorities and to co-operate with the international community in order to find ways to deal with the existing situation.”