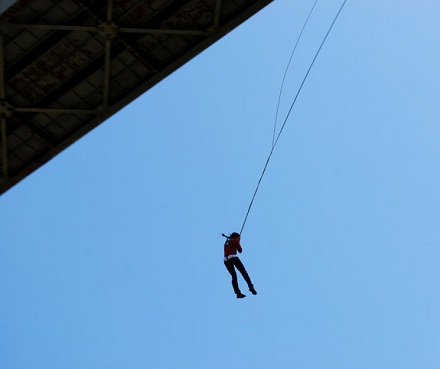 Organizers say they used a car safety belt to attach the ropes to the bridge. The lock may have failed, causing the accident. Two people died. (FB.)

TBILISI, DFWatch – The inquest into the death of a 23 year old woman and a 25 year old man after a rope jump from a bridge in Tbilisi is not yet finished, but there are indications that what caused the tragedy was the use of a provisional mechanism involving a car safety belt lock.

The accident was reported on July 15. Mariam Kandashvili (23) and Goga Goletiani (25) died. Kandashvili died on the spot, while Goletiani survived the initial impact, but died later in the hospital.

The accident happened at a bridge nearby Tbilisi State University’s building in the Maghlivi district.

Several versions of what went wrong are circulating.

The two jumped in tandem and were not using a standard bungee line, but used four ordinary climber’s ropes. This kind of extreme sports is called rope jumping and originated in Russia a few years ago. Usually, rope jumping is done in a swinging movement under the structure from where it takes place, in order to let the sideways movement dissipate the kinetic energy instead of the elastic band, but in this case, the jumps were made straight down.

The bridge they jumped from is 42 meters tall, and the free fall height is 33 meters. What is known is that something went wrong, and the two were hurled down onto a rocky river bed full of pointy boulders. The woman died on the spot, while the man survived the initial fall, but died later at the hospital.

Preliminary findings indicated that the four climber’s ropes were severed. But DF Watch spoke to witnesses who say that the ropes did not break. They say something went wrong at the point where the ropes were attached to the old bridge.

This has called attention to the mechanism used to attach the ropes to the bridge.

Tato Nadiradze, a climber and one of the organizers of the event, told journalists that the reason for the accident was damage to the device used to attach the ropes to the bridge.

“The ropes were attached with seat belts from a car, attached to the underside of the bridge. They provide the opportunity to untie the ropes faster. A double rope, which can handle five tons, was additionally attached to these belts. Those ropes made alpinist so-called eight-ties and then tied to a special brake,” says Nadiradze, quoted by Interpressnews.

He says that when the two who died jumped, for some unknown reason, first the car belt lock came loose, and after that, the brakes slipped.

The day after the tragedy, the Interior Ministry informed that they questioned two organizers of the event, which took place on Sunday July 14. But the ministry didn’t report any details from the questioning.

“Everyone keeps blaming the organizers of what happened. It is easy to blame everything on them. But I know how they always kept checking safety measures. I myself have jumped seven times and he always kept saying that he will never allow any incident to happen,” one of extreme sport lover tells us, remembering that the organizers of the event often allowed people to jump for free. They did not do it for money, but were enthusiasts.

The organizers exclude that the ropes were severed and say it was not wrong to let two persons jump together, as climber’s ropes can handle several tons of goods and a person is tied with four such ropes.

The organizer says they have conducted 1 200 jumps with these ropes and 500 out of them were tandem jumps.