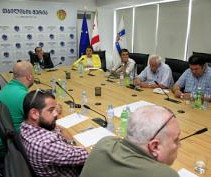 TBILISI, DFWatch–Tbilisi City Hall on Wednesday met with the company that won the tender to construct a hotel complex on Mirza Shafi Street in the old part of the capital.

Apart from Vice Mayor Dimitri Kumsishvili and members of the commission which participated in choosing the winner project, the meeting was also attended by architects and members of the cultural heritage council, according to the City Hall press office.

Tbilisi City Hall claims that the company has followed a recommendation to reduce the size of the complex and leave more space in the area.

Company representatives promise to improve the architectural and technical aspects of the project.

Giorgi Batiashvili, an architect who attended the meeting, said that the project has improved and the area to be developed has been reduced by about 5,000 square meters.

Despite City Hall’s remarks and approval by Tbilisi City Council, the project on Mirza Shafi Street has many opponents, not only among activists, but also members of the council from National Movement and an independent. They believe that the massive hotel complex will devastate the authenticity of the historical Abanotubani district.

They asked the city council to hold a ballot about postponing the project until further consultations may be held, but the council ignored the request and approved the project.