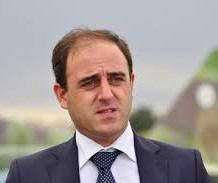 TBILISI, DFWatch–Dinamo Stadium is now ready for the August 11 UEFA Super Cup match between Barcelona and Sevilla, the mayor of Tbilisi said after a session of the organizing committee on Tuesday.

Mayor Davit Narmania said his city is ready to host the Super Cup and that preparations are now in the final stage, with new chairs being installing.

“More than 30,000 chairs are installed and in a week this process will be completed. Thus, we finish large scale work which Tbilisi City Hall took responsibility for doing. We will present a prepared stadium to the Football Federation,” he said.

Georgian fans will be able to buy tickets at cash booths at Mikheil Meskhi stadium from 9am on Sunday.

Sports Minister Tariel Khechikashvili said on Wednesday that the ministry will do as much as possible to avoid the reselling of tickets at higher prices.

He said the UEFA Super Cup organizing committee will meet once more before ticket sales open, to discuss all the possible risks and ways to avoid them.