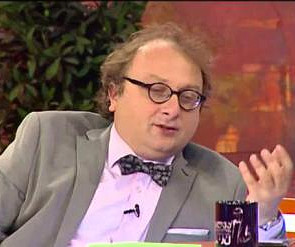 TBILISI, DFWatch–Shalva Ramishvili, a talk show host and producer at Imedi TV, was fired on Tuesday.

In an interview with DFWatch, the journalist ruled out the possibility that he was fired because of government pressure. There was no warning from the owners or the director of Imedi, he said.

“Today, the company which prepares Ilo Beroshvili’s Show, Once in Georgia, the TV series Ori Gogo (which hasn’t been aired yet) and provides my participation in the talk show Politics, received a letter from Imedi TV that the contracts have been terminated. The reason is not explained, and accordingly, I won’t be hosting Politics this Friday with Teona. Sunday there won’t be Ilo Beroshvili’s show and the new TV episodes are also terminated. I am planning to find out what is happening,” Ramishvili wrote on his Facebook page Tuesday evening.

Ramishvili writes that the TV company violated the contract conditions and fired him and 50 other people without explaining the reason. Imedi TV has not yet commented.

Ramishvili says that there have been some reasons, but he will wait until everything is clear before talking about it. He explained that the contract says the parties must inform about termination of contract 30 days in advance, which Imedi hasn’t done.

“The only thing I can say now is that pressure from the government is ruled out,” he told us.

In 2013, Shalva Ramishvili was head of the election headquarters of President Giorgi Margvelashvili, and went on to work at Imedi TV and the president’s administration. Earlier, he was a host the talk show Subiekturi Azri at Maestro TV. He has also worked at Radio 105 and TV 202, a company he was co-owner of.

In 2005, Ramishvili was arrested and charged with extorting USD 100,000 from National Movement MP Koba Bekauri. He spent four years in jail.

Ramishvili is not the first person accusing Imedi of being unfairly sacked. In September 2015, the TV company fired the journalist Inga Grigolia and shut down her talk shows. Ramishvili used to be a co-host, along with Grigolia, of the talk show Imedis Kvira, which was also shut down. Imedi explained that the TV company was reorganizing its social and political shows.

The talk show Politics was a replacement for Inga Grigolia’s political Show Reaktsia. It was hosted by Ramishvili and Teona Gogelia.

We were unable to get comments from Gogelia and Imedi TV.