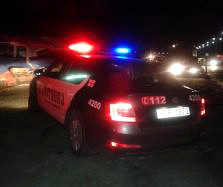 TBILISI, DFWatch–A suspect has been identified in the case of a car bomb on Tuesday targeting the car of a member of parliament for the National Movement.

The Ministry of Internal Affairs (MIA) said Friday evening that law enforcement bodies searched several houses and found guns, as well as explosive devices and the materials needed to make them.

“We have identified a person affiliated with this crime,” the ministry wrote in a statement, which also says the person’s whereabouts are unknown.

MIA did not share more details, citing concern for protecting the investigation.

A car belonging to MP Givi Targamadze blew up in the evening of October 4, a day before the National Movement held its big election rally and three days before the election itself. He was in the front passenger seat next to his driver.