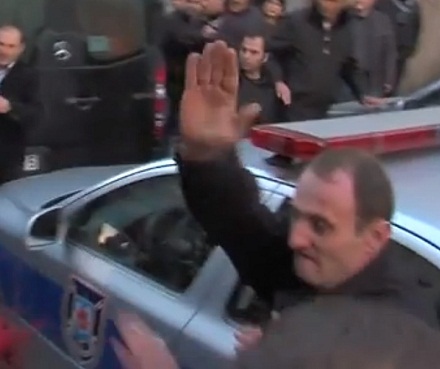 TBILISI, DFWatch–The man suspected of beating a member of parliament outside the National Library last Friday was Monday allowed to go free until his trial for a USD 1 200 bail.

Gela Mamaladze is charged with physically assaulting Chiora Taktakishvili, Sergo Ratiani and Giga Nasaridze, activists for President Saakashvili’s National Movement party, who had come to listen to his annual state of the nation address.

Mamaladze’s lawyer asked for a USD 600 bail, as his client is unemployed with a large family and a father who is ill.

Although allowed to go on bail, the defendant is still in Gldani Prison in Tbilisi, where he remains until he pays the bail money, which must be done within 20 days. The trial is scheduled for March 21, 2013.

Lawyer Vakhtang Taniashvili told journalists after the court hearing that his client admits guilt and will cooperate with investigators, but that he didn’t mean to physically assault anyone; it was just a reaction to name-calling.

Meanwhile, the police detained another accused, who participated in the violence on February 8. Nikoloz Arabuli, 40, is accused of beating member of parliament Sergo Ratiani.

Arabuli was identified on the basis of video material and witness testimonies and he is now placed in an isolation cell.