Suspect arrested for blowing up MP’s car days before election

Suspect arrested for blowing up MP’s car days before election 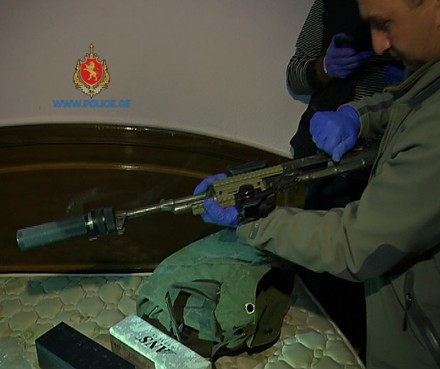 The police confiscated explosives and weapons in the apartment of one of the suspects. (police.ge)

TBILISI, DFWatch–A man was arrested Monday in Georgia, accused of involvement in the blowing up of MP Givi Targamadze’s car just days before the parliamentary election.

The man, born in 1976, was arrested as part of the investigation into the explosion which hit Targamadze’s car in the evening October 4.

The detainee is charged with illegally storing a weapon. The Ministry of Internal Affairs (MIA) did not specify his connection to the car blast.

Another man born in 1974 was charged in absentia in the same case.

Police searched houses and garages of the two people, discovering a large amount of weapons and explosives as well as drawings of Givi Targamadze’s house and workplace. Police also found items that could be used for explosives and manuals about of how to manufacture them.

The investigation continues in order to identify more people related to the blast.

Targamadze’s car was hit by an explosion in the rear section while passing the Kolmeurnoba Square in central Tbilisi in the evening of October 4. Targamadze and his driver escaped mostly unharmed, but several passers-by were injured.