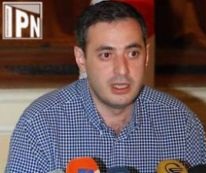 Gaba Gokashvili, parliamentarian for the ruling National Movement party, says his party has the same level of support now as it used to. NDI's poll showed them with an 11 percentage point drop. (IPN.)

TBILISI, DFWatch – The opposition Georgian Dream party does not trust the results of a survey conducted by the National Democratic Institute (NDI), which shows that the governing party of President Saakashvili has twice as much support as Georgian Dream.

The government says its support is still high and in fact is the same as it was in the last poll in February. But both sides published results of their own surveys, where both forces have much higher results than NDI’s survey showed.

According to the survey conducted in February, the National Movement had 47 percent support. The new survey conducted in June showed that the amount of support fell by 11 percentage points. Georgian Dream’s rating has increased by 10 percentage points and is now 18 percent. The Christian Democrats had 3 percent in June, the same as in February. The other parties score close to zero.

This is the first time NDI has published the part of their survey which measures the support for political parties.

Even though the new survey presents results that are similar to a survey conducted in 2010 before the local elections, which were almost the same as the election results, the opposition does not trust NDI’s surveys. The government, on its part, says that they have not lost support, and that these indicators are caused by various factors.

Goka Gabashvili, one of the leaders of the parliamentary majority, says that NDI publishes so-called undistributed data, while they have specific data.

“If we consider so-called undistributed voters, we have higher support. NDI’s results are in accordance with the results shown in the other surveys,” he claims, adding that they have not yet started the election campaign.

“We have ideal conditions for starting the election campaign. The voter will make a final decision on Election Day. For months, several percentage variation isn’t meaningful to us. The main trend is size, and we have much more voters than our opponents have.”

The Georgian Dream coalition expresses distrust towards the new survey. Maia Panjikidze, spokesperson for the coalition said at a briefing on Monday that the main indicator for them is not numbers published by some institute, but the unprecedented number of supporters who have shown up at the five rallies held since May.

She noted that despite this, they have great respect towards American organizations.

Levan Vepkhvadze, who represents the Christian Democrats, says that their party’s rating has not changed as they hadn’t started the election campaign when the survey was conducted. They only started the campaign last week.

He says the survey shows that their party has a potential to increase its support and at least receive 10 percent of the votes on the parliament elections.

The rest of the parties’ ratings are not more than 4 percent, including the Labor Party, which before used to received 7-8 percent in elections. They are dissatisfied by NDI results and ‘condemn’ it and call the survey ‘another lie by the American colonialists.’

After NDI published the results of the new survey, both the government and Georgian Dream published results of other surveys, which show a completely different picture.

If there were elections tomorrow, 57 percent would vote for the National Movement, according to a survey published by the party itself.

The government ordered the survey in June, and it was carried out by Greenberg Quinlan Rosner. 31 percent answered Georgian Dream, 4 percent the Christian Democrats and one present the Labor Party. 5 percent said they don’t know or haven’t decided yet.

Acccording to a survey conducted by Consultation Research Centre at Oxford University, 43 percent considers that the Georgian Dream coalition can solve their problems, while 30.7 percent hope for the ruling National Movement.

“Survey ended only yesterday and it will be hard for me to speak about final results. But the first result is that citizens are more hopeful towards Georgian Dream to solve their problems and towards its leader Bidzina Ivanishvili, while 30.7 percent expresses trust to the National Movement and the president. 30 percent didn’t give an answer,” says Paata Zardiashvili, coordinator of Young Psychologist Association. This organization conducted the survey on orders of Oxford University’s Consultation Research Center.

The fact is that there now are results from three surveys which radically differs from each other and in fact, three of them were conducted by highly authoritive organizations.

“None of the results of these surveys shows the real picture, because all surveys were conducted by Georgian organizations on orders of someone. We should consider that the number of people questioned is very few. It is good that there is some picture of people’s attitudes for elections, but we cannot make serious decisions,” he says.