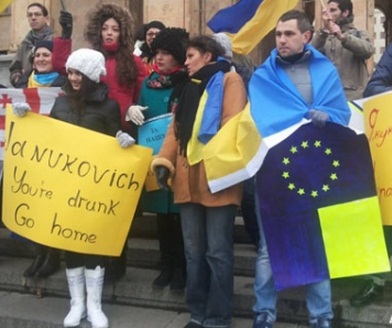 Georgians have been gathering every day at the same place since the protests started in Ukraine. (Interpressnews.)

TBILISI, DFWatch–Supporters of the protesters in Ukraine gathered Sunday in Tbilisi to support a mass mobilization in the Ukrainian capital.

The gathering outside the former parliament building started at 14:00, the same time as the demonstration in Ukraine.

Georgians, as well as Ukrainians, brought EU flags and Ukrainian flags and wore yellow and blue.

“We cannot have any political influence, but moral support is very important for the Ukrainian people,” the rally’s organizer Otar Karalashvili said during the gathering.

Ukrainians in the protest camps in Kyiv thanked Georgians for the support via phone which was switched to speakers.

Georgians gather every day at the same place in the evening to express solidarity and plan to continue gathering until there is peace in Ukraine.

Environmental activists also held a rally on Sunday at the same place and same time. They demanded a stop in the construction of Khudoni hydro power plant in the Svaneti region.

They asked the government to fulfill the promises it made during the campaign for the parliamentary election and not allow the construction of large power stations and dams in Georgia.

There was a verbal confrontation between participants of the two rallies when one of the participants of the anti-Khudoni rally asked the pro-Ukraine demonstrators to also support the protest against construction of the hydro power station, which threatens Georgia’s nature and its people.

The conflict was quickly resolved and the two rallies ended independently from each other, according to Interpressnews.