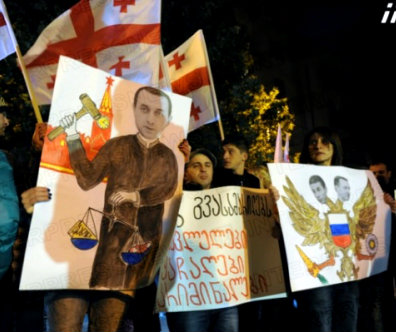 TBILISI, DFWatch–Supporters of Georgia’s former regime demonstrated outside the house of the prime minister on Sunday. Outraged passers-by confronted them, and several people were detained in the scuffle.

The protesters demanded that the courts are freed from political pressure. Among them were National Movement MPs Akaki Minashvili and Goga Oniani.

The National Movement, a political party led by former President Mikheil Saakashvili, has seen many of their top people put on trial and jailed since the change of government in October, 2012.

When the prison abuse scandal broke September 19, 2012 he resigned as Interior Minister. Many prisoners and their parents accused him of being personally involved in a number of torture incidents. He was also accused of being involved in a rebellion at Ortachala prison in Tbilisi on March 27, 2006. He was thought to be one of the closest allies of Saakashvili.