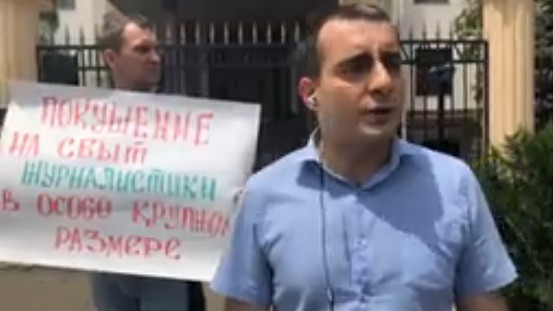 TBILISI, DFWatch–Journalists and civic activists gathered in front of Russia’s diplomatic representation in Tbilisi on Saturday to protest the prosecution of  Russian investigative journalist Ivan Golunov.

“Even though we are not in Russia, but in Georgia, we decided that we can and must do something[…] The repressive measures that have been taken recently in Russia, especially in connection with the new law about insulting the authorities etc., should not go unanswered,” Egor Kuroptev, a journalist at Russian language weekly news project Pogranichnaya Zona, said to Sova.

He was joined by other Russian journalists and their Georgian colleagues and others in front of the building of the former Russian Embassy, which after the Russo-Georgian War of 2008 was turned into the Russian Interest Section of the Swiss Embassy in Tbilisi. About a dozen people took part, holding posters with slogans like “Freedom to Ivan Golunov”. 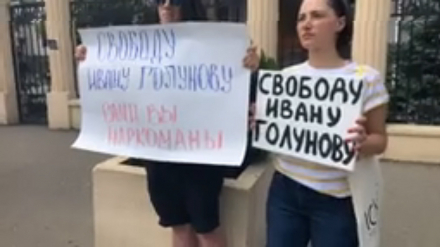 Golunov works for the independent news platform Meduza, which is critical to the Kremlin. He was arrested on Thursday and charged with drug dealing charges that may lead to up to 20 years in prison. The journalist flatly denies the accusations.

On Saturday, however, under growing pressure from the media community, the authorities released him and placed him in house arrest.

Meduza insists that Golunov has been beaten by police during his detention.

The 36 year old journalist is known for investigating corruption among government officials, and many of his colleagues attribute his arrest to his job, stressing how easily criminal cases can be fabricated by Russian authorities.